One of the most unusual named streets in Redcar, but in actual fact has a foreign connection behind its name.

Although now a car park, leading off the sea front, (with the Royal Hotel on the other side of the 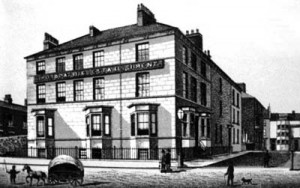 street) the original location was that of Doctor Horners Hydropathic Establishment, where the members of the public visited for sea water remedies, and was the place that cured all ills.

One of the cures was invented by an Austrian gent by the name of Graffenberg.

It was his importance that gave the street it’s name. Mr. Graffenberg never in fact visited the place to see his ‘street’