LAW & ORDER – Happenings Along Our Coast up to 1872 Smuggling

HAPPENINGS ALONG OUR COAST
UP UNTIL 1872

Up to a period within the memory of men now living, the dwellers on the slip of the coast from Lindisfarne to Flamboro’ passed their lives in restless insecurity. The Saxon, the Dane, the Norman, the Spaniard, the Dutchman, and the Frenchman, have all by turns scared, plundered, or slain the daring fisherman who in the intervals of rest had crept again to the sea coast to seek his living in the deep waters. It were bootless to tell in detail of their incursions, inasmuch as they are simple matters of history with which everyone is conversant. And it would not be difficult to find a reason for these attacks on our coast. Our shores afford ample beach facility for the landing of boats, and our secluded bays splendid shelter for an enemy’s ships. What could be finer for the sloops of the Danish Vikings than the shelving beach from Saltburn to Coatham, and where could more silent bays be found than those of Skinningrove, Staithes, and Runswick? This very fitness explains why Paul Jones should seek shelter in the first mentioned bay; and the insecurity and discomfort from such a visitor is plainly inferred, from the shot hole which he left behind him in Skinningrove Hall. Besides the presence of the foreign invader and freebooter, the smuggler has played no unimportant part in the history of this locality. Saltburn was long known as the northern depot of the smuggling trade of this kingdom, and men now live who can tell of its former glories when “Will Watch, the bold smuggler” – who sleeps his last sleep, so tradition says, beneath the lofty crags of Huntcliff – led the hand to hand fight with officers of the law. The sound of pistol shot and sable slash, and the sight of dead men carried home, is not so old an experience but that some may be found who can tell of it. 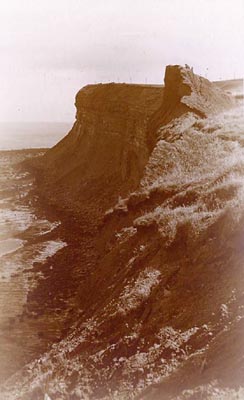 Many of the old houses in Redcar and Coatham still show the hidden chamber and mysterious locker, so necessary to a law breaking people. The deeds of their tight little “Lark” and her Captain, who let his old ways and lived to a good old age and at last died respected, still form the staple of many a yarn, which the sailor spins at the Lifeboat Corner on the dark wintry nights. Lastly, let us but hint at the presence of that armed officer in blue, the Coast guardsman, who passes us by at nightfall with pistol, and sabre beneath his belt, and it will be seen, how that the fashion, whilst the cruel reality which it shadows forth is consigned for ever to the limbo of a hideous past. These rocks and seas and sheltering bays look as of old, but not so the character of the race which dwells upon or near them. “The old order changeth giving place to new” receives day by day its solemn confirmation. No longer is McNaughton to be seen with his pikemen, mustering in force on the beach at REDCAR, to repel the invading Frenchman. No longer does the beacon light on Eston Nab blaze out it’s a false alarm. No longer does the storm driven vessel dread the human wreckers as strongly as she does the fury of the breakers. Peace and love, and law and justice have breathed over our land, and from the face of it are dissipating the full powers of rapine, lawlessness, and terror. Invaders it is true still visit our shores, Norman and Frenchman, Dane and Teuton, tread the decks of the countless vessels which appear day by day off Huntcliff point, but no longer exulting with roaring cannon and alarming drum, and bearing aloft the gory sword and murderous arablest, but coming as peaceful men, and brothers in this world’s family, with food and clothing for our teeming population. Instead of the low thatch, half hidden with sand, found on our coast up to within the last few years, as if fearing the light of day which should point it out as a mark to the rover, stately mansions and “lordly terrace” lift their sculptured fronts to the sky, and rest in a security as profound as any dwelling, in the most selected valley in the interior of the kingdom. The Danish villages of Ormesby, Lazenby, Marske, and the new Middlesbro’, are thronged with the descendants of the peoples who were once the scourge of the north, and in the pursuit of peaceful arts and homely trades, they forget alike the ancient feuds and lawless lives of their ancestors. Vying with the Englishmen in the production of articles of comfort and use, they still struggle on as of old, but only in a generous and law-abiding rivalry; and significant is the fact, but yet full of maning, that Bolckow, the German millionaire and one of our great northern benefactors, represents in the National Council the wants and wishes of a thriving English centre of industry like Middlesbro’, whose marts now resound with the harsh guttural northern lingo and in whose docks lie the vessels of all nations. Englishman and German – Vaughan and Bolckow – both united have stretched the long line of blazing light which shines from Stockton to Tod Point, and which represents, not the burning or sack of cities or villages, but the labour and bread, the comfort and content of thousands of England’s sons. The time cannot surely be far distant which this change only faintly indicates, when trade and commerce, based upon truth and right, shall so link nations together, that being brothers in trade they shall be brothers in love, and so verify the ancient prophecy, of a time which should come, when the sword should be turned into a ploughshare and the spear into a pruning hook.