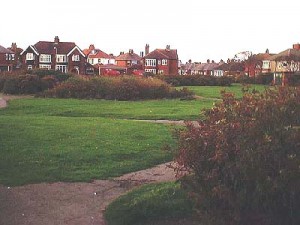 This park is halfway along the Coast Road, Redcar, and is apparent by the space between the houses. Now just open parkland there was originally a pond with water lilies planted it.

During recent years the Northumbrian Water Board extensively excavated the park and placed underground what was believed to be holding tanks for surface water, connected to their system along The Stray near to Zetland Park. (Pumping House)