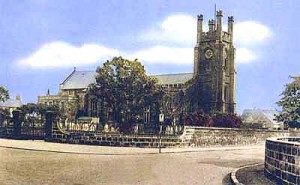 Located Redcar Lane and was built on “monks land”. Monks visited the area both for supplies, and passing through to and from surrounding abbeys. Redcar at the time was a ready source of salt and fish (even salmon)

The foundation stone of the church was laid (by Lady Turner) in 1823, and took about 6 years to build. Before this the areas population had to make their way to a Marske Church for funerals etc. The stone for the church came from a quarry located at Upleatham.

As the population of the town grew so the church was extended in 1829 and a further foundation stone laid by Lord Zetland. This was also the year of it consecration. The local fishermen played an active part in the building of the church, with ships docking in Hartlepool and the cobbles bringing the wood across the bay to Redcar.

When the church was built the clock tower was built with very identifiable turrets and a clock with three faces. The face omitted was that facing South where no residents resided. The clock now only has two faces, but was of considerable help in the past for local fishermen who used the tall landmark to steer correctly through the rocky coastline.

Burials stopped in the surrounding graveyard some years ago and some gravestones can actually still be seen around the wall of the grave yard.