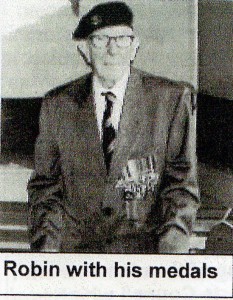 on the North Atlantic convoys during WW2 was a very humbling experience. Robin and many of his colleagues taking food and provisions to beleaguered Russian people faced not only being attacked from the air and from U-boats but also from the sub zero temperatures. Orders came down that gloves must be warn at all times when outdoors and bare flesh must not come into contact with metal handrails etc. Robin served on HMS Sheffield and sailed to Archangel and Murmansk and tells of being attacked by heavy gunfire at 08:00 am one morning and his hip was badly damaged and sailed into dry dock, He was granted shore leave but he became very ill with pneumonia and as he said the pain was unbearable. He recalled a very stern Sister on his ward but said she was the reason he pulled through. She would not stand any nonsense and she would hold you really tight when the pain was bad. He recovered enough to take part in the D-Day landings.  He was awarded many campaign medals but nothing for the Arctic convoys. After many years campaigning to our Government our local MP Ian Swales took up the challenge and the Russian Government decided to award medals, each inscribed with their name.

And You Want to Burn the.Bloody Place Down

Joyce Dowding 91 a founder member of our group 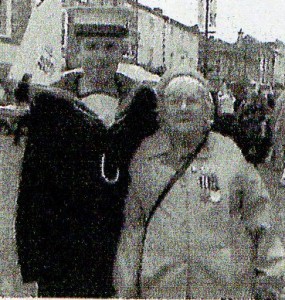 joined the Navy Army Air Force Institute (NAAFI) to train as a cook when war broke out. She volunteered to support our troops after the D Day landings and arrived in Normandy where she boarded a truck which took her to the devastated city of Caen. Many soldiers were billeted there and it was her job to feed them. She and her fellow cooks were working in an old cinema. All she had was a battered old stove and old engine oil to cook with but she and her fellow cooks heated broth in anything they could find including old bully beef tins. One day the oil caught fire and the lads tackled it with blankets but some damage was caused and the Colonel came to inspect the damage and said to Joyce. “This is the only building left standing ¡n Caen and you want to burn the bloody place down.” Joyce was going to be one of the leading lights at the RAF unveiling because of her service only she wasn’t well enough to attend. She is much improved now. 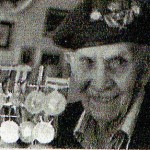 Ace wartime air gunner William Caster attended the service and has been honoured with a Bomber Command clasp, or bar, special award. This means 90-year-old hero William, or Bill as he is often known, of Eston, is now the proud owner of no less than three bars on his chest full of hard-won RAF medals. Bill did a full tour of 30 perilous missions over France and Germany in World War Two in Stirling and Lancaster bombers, He also saw service in Burma fighting the Japanese. 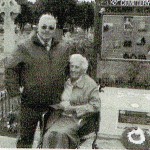 Gina Craggs aged 94 is another founder member of the Friends group and served in the Women’s Royal Air Force during World War 2. She read the lesson at the unveiling ceremony. The picture shows Gina with Johnnie A McManis who ¡s a Texan and served ¡n the RAF during the war and was based in lpswich. Gina was a signaller in the WAAFs and based in Anglesey in North Wales and left to take up a post ¡n Warrenby for Dorman Long. In 1942 she recalls bombs dropping on the mill alongside where she worked.