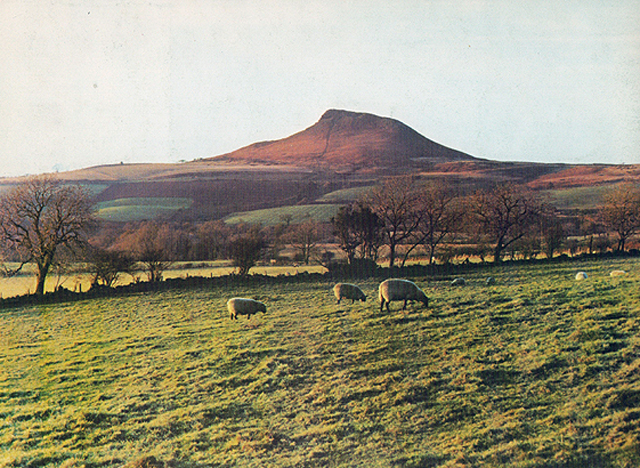 THE LEGEND OF ROSEBERRY TOPPING, YORKSHIRE.

The old legend of the death of Prince Oswy on Roseberry Topping, whither he had been sent by the Princess, his mother, to baffle the prophecy of the augurs who had foretold his death on a certain day, has been happily been done into verse by Mrs. Phillips, and appears with a full page illustration, in this month’s “Belgravia.” The legend is related in full in Camden’s Britannia the author on serving that the lady chose Roseberry on account of its lofty and isolated character, where she thought it impossible that such a misfortune should “befal her son.”

The legend of Roseberry Topping, Yorkshire.

Dream had warn’d and seer had spoke of Northumbria’s heir:

‘Count his birthdays warm by one, of the fifth. Beware!’

Chance, disease, or traitor’s – what, no profits, said;

Fair upon the Yorkshire Moor’s glow’d the 8th of June,

Five years would Prince Oswy count at the stroke of noon.

Hi on the lofty Roseberry sat the nurse and child;

Bright the sun on Cleveland rose, gilding hills and dales;

Rich the uplands swept away on to Richmond’s vales.

Beyond, the glorious northern sea lay in living light.

Down the hillside from the crags ran the shout of joy,

As mid rocks and heather-blooms sprang the happy boy.

True and keen. The soldiers watch’d; rough and tender jest,

Swore no harm could touch the babe on the Topping’s crest.

At her Priory of Mount Grace, Princess Gerda prey’d,

All her care could do was done-‘ Mary Mother, aid.’

On the counted hours crept; the anxious vigil done,

‘ Call the boy. What, ho, my price’’through the summer gloaming.

‘ What! He hears not! Call once morel.’ With a growly dread,

Fast and far uphill and holt, onecht and captain sped.

Speechless in her presage dark, Gerda led them on.

Just below a tiny back through green fern-leaves crept.

It danced with lily blossoms, with Violet leaflets play’d;

It sigh’d around a baby face, amid its eddies laid.

It kiss’d the rosy lips, the bright curls flaunting there;

It sang its dirge above him, the widow’s treasured heir.

Where the Esk’s brown waters blend with the fatal beck,

They laid the pretty boy to sleep, fair craft for early wreck,

There. The crush’d life wore away, prayer and penances spent.

Still the travellers who climb the Topping’s rocky side.

Sigh, recalling where of old the mother’s darling died.

EVENT – Opening of a Public Market at Redcar