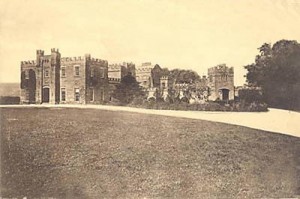 Skelton Castle with its long driveway

The future celebrity of the district was destined to be found in quite another direction of enterprise. In after years, in fact, several centuries later, the sword was no longer the weapon for creating fortunes, the Norman battle-axe was burned, and that motto, “Fuimus,” reverentially recorded the fact.
And in the course of time, from the other side of Cleveland, came the glad shout of another era, the iron cry.

Recording the fact that civilisation was wielding the new weapon. That terse Latin motto, “Fuimus,” naturally lends one mind back to those scenes in the early history of so noble a race as De Brus.
Foremost of them all looms the figure of the founder of the race against the background of the Battle of Hastings. Then towers up to the form of his chivalrous descendant in the “Battle of the Standard,” when on the eve of the battle he proved his loyalty to his King by crushing the invader.
Next follows the event which initiates the historical glory of Scotland – the competition for the Scottish Crown. The Cleveland breed had the staying power which could well afford to wait and Scotland, in sympathy, waited for her true King.
Then comes that romantic incident, which brought the young Scottish Knight, Robert Brus, face to face with Marjory, Countess of Carrick, who eventually had a son with all the virtues and valour of his father’s race to be the hero of the greatest romance of Scottish history – the War of Scottish Independence.
That son was the renowned Robert Bruce. That son was the climax of the beautiful historical destiny of the race which began its noble career in the castle of Skelton. Here in Cleveland the noble ancestors of this renowned Scottish patriot were born.
The apex of that climax was the splendid field of Bannockburn, the glory of which the Bard of Scotland made the world ring for all time in his renowned battle cry

Scots wha ha’e wi Wallace bled,
Scots wham Bruce has often led,
Welcome to your gory bed,
Or to Victory.
Lay the proud usurper low,
Tyrants fall in every foe,
Liberty’s in every blow.
Let us do or die!

Splendid words which make them more interesting when one thinks that here in our midst the ancestors of this patriot, were born. And again, if one takes another view in this panorama of local history, one is reminded of the sad climax in its procession, namely, the execution of Mary Queen of Scots, the beautiful Queen Mary, whose beauty and charm make it all the more interesting when one thinks how nobly she endured a career of misfortune. Then pass on from her to another line, or branch, of this noble tree, we are reminded of the Cavalier King Charles, who in his turn was broken by Cromwell.
So if one takes history of this illustrious family, from the soldier of fortune who fought at Hastings, one cannot fail to notice how conspicuously the Bruces have fared in the history of our country. Perhaps it was only fitting that the civil executioner should bring to a close what was the battle-axe of the soldier of fortune had begun. But one cannot say that the prestige of this noble Shelton-in-Cleveland breed had died out with the execution of Charles I, for one may trace it out the time of quiet English girl, who eventually became the beloved Queen Victoria, who never allowed the splendour of her throne to mar her native sense of simple and pure womanhood. Most beloved of Queens and Emperor of India.