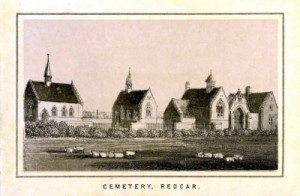 The ceremony of consecrating the northern portion of Redcar Cemetery, which is the only part intended to be used for a time, took place on Saturday morning, in the presence of a large number of ladies and gentlemen. The cemetery, in every respect, is one worthy of the town, and is situated in Redcar lane, about three hundred yards below St. Peter’s Church. The necessity for more burial ground accommodation began to be felt about three years ago, and a Burial Board was formed. The site was the gift of the late Earl of Zetland, who also gave the sum of £1000 towards the fund for forming the cemetery, on condition that his own architects were employed: and the people of Redcar have no reason to regret the stipulation, as the ground has been pleasantly laid out, the chapels, which stand apart, are attractive in appearance and elaborate in detail, and the entrance to the cemetery is in itself an architectural work of no common order.

The architects were Messrs Austin and Johnson, of Newcastle and Middlesbrough; and the contractors, all of whom have given every satisfaction, were Mr William Radge, mason, of Guisborough; Mr Messrs Readman, joiner, Redcar; and Messrs White, plumbers and gas fitters, Stockton. The entire cost of the work is between £4,000 and £5,000. The ceremony, which was performed by His Grace the Lord Archbishop of York, commenced at half-past eleven o’ clock, and only lasted half-an-hour. Amongst those present we noticed the Rev. W. Milburne, vicar of Redcar and Chairman of the Burial Board; the Rev. L. B. Towne, vicar of Coatham; the Rev. J. D. Wawn, vicar of Kirkleatham; the Rev. T. Robson, vicar of Marske; other clergymen, besides the members of the Burial Board, and their clerk, Mr. J. G. Thompson, solicitor.