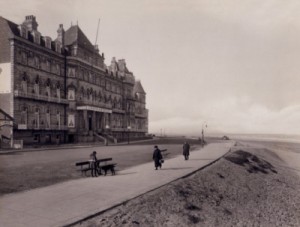 The former Coatham Hotel is still situated at the West end of Redcar being built in 1870, known then as the Coatham Hydro (underground stream) The builder certainly knew how to build impressive buildings. Its not know n by many people, but the hotel was never finished, with cash supposedly running short before one of the two wings could be built. (To look at the former hotel from the front it does look a little odd). The hotel had its own water supply from an underground stream. At the rear it had numerous stabling facilities. The impressive entrance to the hotel, with its large doors and entrance, matched the spacious interior with its entrance foyer; open flowing staircases, ballroom, dining room, and beautiful decor, with furnishings to match. Everything about the hotel seemed large and spacious, as though expense did not matter. The addition of the flat building to the East came later, and introduced another ballroom called the Windsor Ballroom. The then owner Charles Amer built this. It was a spacious building with dance floor, stage area, and complete with bar facilities.

Here at Redcar Past and Present it’s true when we say,

“The Coatham Hotel and the Windsor Ballroom hold a great deal of happy and nostalgic memories” to a lot of people around the world.

COATHAM – Ancient the Camp of Refuge