Accreditation:
On entering this page on Redcar Past and Present we would like to thank the following people and web site concerned for their permission to use details from their site www.naval-history.net and also Lt Cdr. Geoff Mason who compiled the history and photograph, (not forgetting Gordon Smith for his kindness).

For such an old ship – the only survivor of her World War 1-class, she escorted a lot of convoys. Please go to their site where you will find the full roll Redcar’s adopted vessel played in WWII. Following her exemplary role in WWII she was eventually scrapped in 1945. 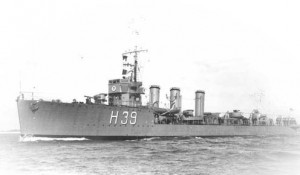 Admiralty “R” Class destroyer ordered from John Brown, Clydebank with the 7th Order. Emergency War Programme on 5th December 1915. She was launched on 11th January 1917 as the 2nd RN ship to bear this name, previously used by a destroyer built in 1895 and sold in 1907. In 1938 she was attached to the Torpedo School at Portsmouth for training. After a successful WARSHIP WEEK National Savings campaign in March 1942 this destroyer was adopted by the civil community of Redcar, then in the North Riding of Yorkshire.

Badge: On a Field Blue a Skate Gold.

Per sequara labor: “I glide (skate) over the surface’.

EVENT – Warning to Householders after fire at Coatham