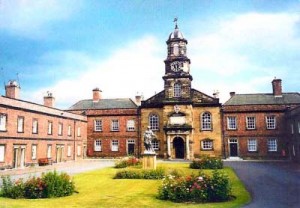 At the centre of the village are the almshouses

I have spent an interesting afternoon. I paid a visit to Kirkleatham, the hamlet which made its appearance centuries before Redcar or any of the industrial towns. Kirkleatham – the very name itself suggests a village steeped in interesting history and local lore.
There one can be transported from the twentieth century to the twelfth in an instant, for the village has lost none of its old-world charm and the traditions of centuries are still to be observed.
Wasps and bees hum over the flowers and the hedges have their beautiful grown broken by light blossom. Midges harass the passer by. In the fields men are tilling the productive soil.
Progress has flung a finger of tar macadam across the countryside along it entered Kirkleatham, village of charm and rusticity.
One notices the brown-stained battlements of the hall, almost covered by leaves, where the early Danes met the fair-haired Saxons battlements which have stood assault and the elements, and one can look into the gloomy interior through the man made breaks in the walls. The bulwark of early England seems to brood over the secrets of centuries. One can almost see the mass of men struggling with their crude implements of destruction. High in the tree tops crows caw harshly but with a triumph note. These trees have been the haunt of such birds for year upon year – their own particular kingdom.

The church drew my attention and I browsed awhile among the epitaphs of the early inhabitants of the village. There is quiet peace and one passes into the cool church to sink gratefully into a seat.
But interest will not be satisfied and on aw all I examine the record of priests in the church of Kirkleatham-in-Cleveland. Down from the 12th century to the present time the whole list is to be seen.
A teak wood chest in the corner marvelously carved, was used for church storage a notice tells me. A little way off stands an imposing chest used by Sir Charles Turner for storing treasure before the foundation of banks.
The worn flooring echoes my footsteps as I view another example of superb craftsmanship. A magnificent eagle with outstretched wings carries a leather-bound bible. Back to the door again and still more carving meets the eye. The font had an interesting top, heavily carved in striking contrast to those in many churches.
Along the road I reach the Alms Houses the legacy of Sir Charles Turner and now named, “The Turner Hospital.” His will provided for the care of ten aged men and ten aged women, ten boys and ten girls.

Here the old people spend the autumn of their days in peace, with delightful surroundings, watched over by the statue of Justice in the middle of the courtyard. There are five statues in all, one of an old man, another of an old woman, and two children – a girl and a boy.
The Museum has many things to show, above all a most exquisite piece of carving, the equal of which would be hard to find in England It was carved by a French prisoner, using only a penknife, and presented to Sir Charles Turner, who was instrumental in securing the prisoner’s release. It is of St. George and the dragon, and depicts every scene that took place. It has been valued at thousands of pounds, and prospective buyers have been turned away. Its case is kept securely locked, but it is an unending source of interest.
Relics and souvenirs gathered by Sir Charles Turner and his family from all over the world and scattered in profusion. Among the more gruesome exhibits is a piece of skin from the back of the last man to be gibbeted.
Ancient prints show early Rome and London, and other rooms stuffed animals stare with heady stupidity. Armour of all descriptions graces another room, and it is with reluctance that I go out at last across the courtyard.

The family chapel is my next step, and half way up the tower a carving sets out the story of the hospital in old English. The chapel is perfect. The marvelous flooring laid in old-world colours is a lively sight. Offers for purchasing have been received time and time again, but the Charles Turner family chapel still remains in Kirkleatham.
Two magnificent gilt chairs stand under a window given to Turner in lieu of a debt by King Charles, who was reigning during that period. The window too is another example of the artistic sense of the inhabitants, its colouring offering an unfailing appeal.
As I took my leave an old resident told me that visitors from all over the world come to see that carving alone.
And so I depart. On the skyline furnaces raise their heads, trains and houses emit their fumes, but Kirkleatham remains the same undisturbed by the passage of the centuries.