Around 8:30 am on Sunday 12‘”, the people of Redcar were awakened by the constant sounding of a ships siren. An easterly gale was blowing, and visibility was much reduced by heavy rain and hail showers. The lifeboat was launched with a crew of nineteen, and after half an hour’s hard pulling they came across the steam trawler Lord C
Cecil aground inside West Scar. She was rolling so violently that her bilge keels were coming clear of the water, and one of them crashed Lord Cecil down onto the lifeboat and smashed some of the oars and thole pins.

Despite the setback the seven men crew began to jump into the lifeboat. One of them fell between the vessels but before he would be crushed one of the lifeboat crew snatched up a boathook and pulled him round the bows of the lifeboat to the side away from the trawler. 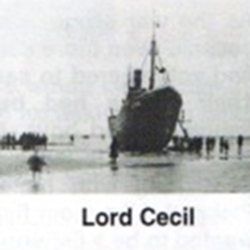 The damaged lifeboat was brought safely ashore and the rescued men were taken to the Royal Hotel. The Lord Cecil was a brand new vessel built by Smiths Dock for the Beacon Trawling Company, of Grimsby. On the afternoon previous to her stranding she had left the Tees for her home port but, because of the bad weather and poor visibility, her exact position had become uncertain. it was decided to turn back and in the heavy showers the trawler had
come down inside Saltscar and run aground. She later drifted clear of the rocks and washed
up on the beach.

COATHAM – Sale of property at Nelson Terrace and Trafalgar Terrace.