Accreditation The Redcar and Saltburn-by-the-Sea Gazette 14/02/1879.

ONE HUNDRED YEARS OF CAPTAIN COOK 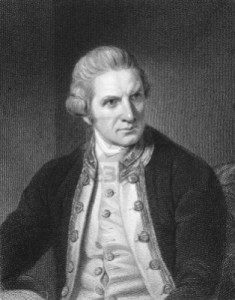 One hundred years ago today, Captain James Cook, the celebrated circumnavigation of the world, met his tragic death at Owhyhee (now Hawaii), one of the Sandwich Islands, of which he was first to discover. The Geographical Society of Paris deems this event sufficient important to call for a special commemoration, and the Royal Geographical Society of England was asked to co-operate in this mark of honour to this distinguished man. For some reason the English Society has nor responded to the invitation and to France alone will belong the honour of marking the centenary of the death of Captain Cook, and of commemorating the splendid services rendered by him to science in the course of his discoveries. Many of our readers are aware that Cook was born at Marton-in-Cleveland, on 27th of October, 1728. His father was a labourer and farm bailiff, and is said to have been a native of Roxburghshire. The thatched cottage which they occupied, and in which Captain Cook was born, was demolished in 1786 to make room for a stately mansion, since burnt down. Doctor Young, the historian of Whitby, in expressing his regret at the ruthless destruction of the birthplace of Cook, says it “ought to have been carefully preserved in honour of the hero who first drew his breath under its roof, and who, had he not been prematurely cut off, might have breathed his last in a palace, as peer of the realm.” A Memorial School was erected on the site by public subscription a few years ago.

Cook was taught reading by Dame Walker, and afterwards learnt writing and arithmetic at Great Ayton under Mr. Skottowe, to whom his father was hind. Before he attained his thirteenth year he was apprenticed to a small haberdasher in Staithes, and at this romantic fishing village, in his conversations with seafaring man, the genius of Cook was enkindled, and he adopted the sea for his profession. For seven years he served Messrs. Walker, of Whitby, in that hardy nursery of British seamen, the coal trade, and in 1755, when hostilities broke out between France and England, he entered the Royal Navy on board the “Eagle” frigate, and four years afterwards was appointed master of the “Mercury”, in which he was present at the siege of Quebec. During that memorable siege he was ordered to take the soundings of the St. Lawrence, to enable the Admiral to lay his ships before the enemy batteries; being discovered, he was pursued by the Indians in armed canoes, who surrounded him, and he only escaped by leaping from the bow of his boat when running ashore as the Indians entered the stern, and carried the boat off in triumph.

In 1759 he was appointed to the command of the “Northumberland” man-of-war, and whilst on duty in Nova Scotia studied Euclid and improved his education.

It is related that he became an able mathematician, and in 1767 he received his commission as Lieutenant and was appointed commander of an expedition to the Pacific Ocean to observe the transit of Venus. After successfully observing the transit he prosecuted his discoveries in the Southern Ocean. On this voyage he made the discovery that New Zealand, hitherto supposed to be a continent, consists of two islands.

On his return to England the King raised him to the rank of Captain, and he was again appointed to make explorations, in the higher Southern latitudes than he had hitherto traversed. It is impossible to even give even a bare outline of Cook’s famous achievements in our limited space, and those who are interested may peruse them in detail in one of the many published accounts of his life and voyages.

After being raised to the rank of Post-Captain, he again set out on another voyage of discovery, and met with his death in a scuffle with the natives at Owyhee, who had stolen a boat belonging to his ship, on 14th February, 1779.

All historians agree placing Cook in the rank of the most famous circumnavigater and discoverers: though of humble birth, he was a man of high and noble character, in which qualities of sagacity, decision, and indomitable perseverance were combined with a humane and sympathetic spirit which rendered his crew devoted to him.

Distinguished honours were paid to his memory both at home and by foreign courts, and a suitable pension was settled on his widow.

The remains of his father rest in the Old Churchyard at Marske: his sister Margaret lived and died at Redcar, and it may be news to some of our readers to be informed that Mr. Robert Lee, of Redcar, is a direct lineal descendant of the sister of the famous circumnavigator – her daughter, Grace Carter, being his grandmother. 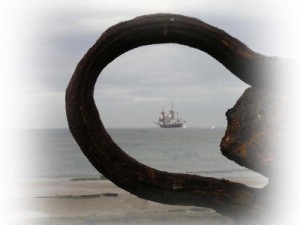 The replica “Endeavour” sailing North having just passed the grave of Captain Cooks’ father in the graveyard at Marske. Vessel seen through the recovered anchor of the “Birger” Esplanade, Redcar. Accreditation F. Brunskill