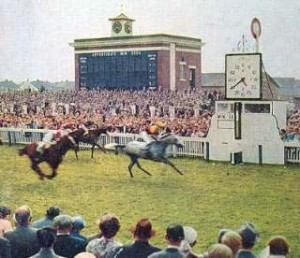 Redcar Racecourse. A large full circuit course, with its main feature, the straight one mile run in to the winning post.

For many years, before the present racecourse came into being, horse racing was carried out on the sands.

During the 1800’s racing became even more popular that a group was set up which formed the first committee of the Redcar Race Course. As a result Redcar became more prominent on the horse racing calendar with entries for the race cards coming from further away (Yorkshire Dales).

It is also one of the very few courses in the country to have a ‘Straight Mile’ with the turn into the ‘straight mile’ starting roughly about the area of Goodwood Road, and then in a line more or less running parallel with Redcar Lane, to the finishing post near the Grandstand.

The present Princess Anne was a jockey in a meeting at this course.