THE SEASON AT THE SEA SIDE 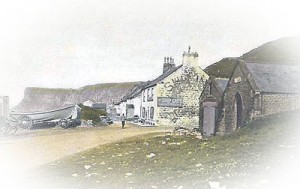 Now known as the Ship Inn, Saltburn, but this picture actually has the Ship Cafe board outside. The mighty Huntcliff in the background with the Lifeboat House and Mortuary (forefront) on the right.

There will be no reason to complain of dullness as the variety of attractions presented by Redcar, Coatham and Saltburn are such as to afford an ever varying round of pleasure and amusement by land and sea as will afford recreation to all who for pleasure or health visit our shores. The new cemetery, with its two chapels, lodge, and lich-house, now in course of erection, about a quarter of a mile from Redcar Church, will also be source of interest, and the grounds properly laid out will be an attraction to those who feel the need to some inland walk when tired of the beach. As there is not park, it is hoped that the completion of the buildings these grounds will be so laid out as to add one more to the objects of interest at Redcar, and before another season we shall doubtless see the cemetery grounds ornamented with trees and flowers in a manner worth of the place and of the buildings, which are of very handsome design.

At the Redcar Pier head the handsome windscreens shelter the pier head, and on the band day’s music of the best description will be furnished by Mr. F. Groening’s Military band of sixteen performers, which the Directors of Redcar Pier have engaged for the season, commencing the 24inst. This band will perform two days a week on the Redcar Pier, giving on each day a morning and evening performance, and on the other four days the same band will perform in the grounds at Saltburn. A band will also perform in the Concert room on the Coatham Pier during the season, and at the Music Promenade at the Central Hall. The Redcar and Coatham Band will perform during several evening of the week on the Esplanade and in the most fashionable quarters of the place. The musical attractions of the coming season will thus be on a more extensive scale than any previous year. 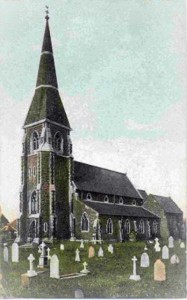 Christ Church, Coatham, earlier when built known as the “Church in the Fields” as all around it were fields and farm land, plus a few fishermen’s cottages.