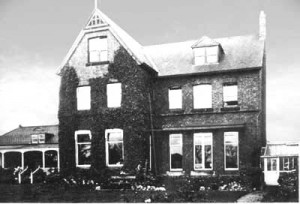 Originally, the Stead Memorial Hospital was a Victorian villa named ‘Everdon’ located in Kirkleatham in the Coatham end of the town, along with many more similar houses of the at era. They were houses large and roomy. ‘The Stead’ as it is commonly known was the former home of Doctor J.E. Stead who came to the town and helped the local iron masters to make steel. He died in 1923.

It was then through his will that the villa ‘Everdon’ was bequeathed to the then Redcar Borough Council, for use as a hospital. The villa had only room for a limited number of persons (7), but steps were taken through a Local Hospital Charities Board to raise funds for the newly formed hospital. Between, £750 – £1000 was raised in a short time, which saw the hospital up and running. The hospital opened on Tuesday, 26th March 1929 by the then Dowager Marchioness of Zetland. To complement this the town doctors offered their skill and services free during the first 12 months of opening.

During this period it would appear that the townsfolk, business men, and notable persons became involved in the fundraising for the hospital and as the years past monies were raised by people leaving legacies, private donations, and the usual forms of fund raising through raffles, garden parties etc. One of the biggest events for fund raising for the hospital was an annual Redcar Charity Ball, held early in the year in the Pier Ballroom. Soon purchases were made for the villas at either side of the hospital, which greatly increased its capacity and the services provided.

Local doctors referred patients there. Those who could not pay were treated free of charge, and those who could pay were charged accordingly for their stay in hospital. Minor operations were carried out at the hospital, with other facilities such as physiotherapy and heat treatments making the hospital well known throughout the area. The Stead over the years whilst changing from its original beginnings as never really changed in the way it accommodates people who are aged, sick, and in need. Today it still carries out work for local doctors, dressings, x-rays, physiotherapy, and minor scuffs and scrapes, but no major injuries.

Alas as we put on record the fabulous history serving the residents in Redcar and surrounding villages and towns, progress has overtaken it, and a new hospital has been built. The patients have been transferred to the new hospital, and the Stead now empty for the first time after all these years is purportedly being demolished and new housing placed on the site.

THE START OF THE

During 1927 steps were taken to put “Everden,” the large villa presented to Redcar by Mr. Arnold Stead, for hospital purposes, into the use for which it is intended. Meetings of the General Hospital Committee, which has been raising funds during the past 3 years, the Redcar Nursing Association and the Redcar Committee of the Red Cross Society have been held. It has been decided that the Nursing Association and the General Hospital Committee jointly should manage “Everden,” which will be used for the first aid and Maternity work. The General Committee will grant £500 towards the cost of furnishing the building and £250 towards the first year’s expenses. The hospital fete and motor ballot this year have raised £1,000.

The official opening of the X-Ray Department of the hospital took place on Saturday 18th March, 1944. Following charity drive and other events in the town over the previous year(s) the £1,1180 for an X-Ray machine was raised being the most modern of its kind. Its own building and department was also erected on the side of the hospital.