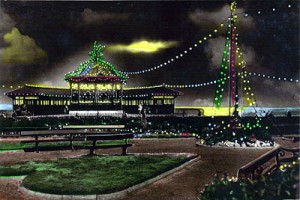 This was a park was opposite the then Bandstand on the Promenade. Today’s location is the actually the triangular traffic island on which stands the public toilets).

It was in fact a comedian who appeared at Redcar that gave the park its name.

The park was triangular in shape and surrounded by a metal fence. An small ornamental structure was in the centre, with surrounding flower beds in the shape of suits of cards. Pathways meandered around the flower beds. Gates to the park allowed people to enter and seating was provided. It was a special place for nannies in charge of children, and babies. They used to sit in the park, and bottle feed babies. Hence the name.

SHIPWRECK – Schooner on the rocks at Redcar “Charles”