Is it the Smallest in England ?
By Joseph F. Hurst, North Ormesby 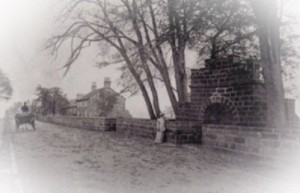 Standing by the roadside about three miles or so from Redcar, is a small stone building. Of the thousands who pass by in the summer months, how many pause to give a thought to the historical attachment and world-wide interest this old world church has created in the past? For years newspapers in different parts of the country have encouraged controversies as to which is the smallest church in England. Many different claims for this distinction have been put forward, but I think when most of these claims have been considered, that we have here in Cleveland, the church that has the most right to this novel distinction. If one cares to pay a visit to this small but historic edifice, one cannot fail to observe the novelty of the building and gleaming through the visitors’ book one sees that visitors from almost every country have at some period thought it worth their while to call and satisfy their curiosity. Though not used as a place of worship today, the interior is practically the same as when it was used for that purpose, although the work is in places badly disfigured by visitors carving their names and initials upon it. Hanging on the walls are the original coat-of-arms granted to the illustrious north country families, who centuries ago owned the manor on which the church was built. There are also on the walls, tablets erected to the memory of members of these old houses. On the south wall is a tablet to the memory of George Smallwood who died 1680. Upon the floor is an effigy, much mutilated, and as the coat-of-arms on the wall are so defaced there is doubt as to who is actually buried there. As to the actual age of the church I think the year 1096 is the nearest date to be procured. But it has, at different periods, undergone various alterations and repairs, which has of course destroyed much of its antiquity. Half way up the tower there is a stone bearing the date 1684 no doubt the year the tower was rebuilt.

The Tiny Church in the Wood

Visitors to Hastings often climb the hill to Hollington to see the tiny “church in the wood.” This small church has been restored, but it is still secluded as it was in the days when Charles Lamb was so enthusiastic about it. There is a local legend connected with this church, which is that the devil once removed the church from its original position and placed it in the middle of the woods so that worshipers would have great difficulty in finding it. Another very small church is that of St. Lawrence, at Bradford on -Avon. This is a good example of Saxon stonework. It was erected in the 7th century. 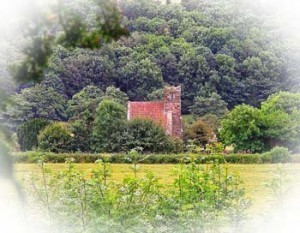 Culbone Church, near Porlock, is certainly the smallest church in Somerset, and many give this church the distinction of being the smallest in England, but comparing the sizes of this church and Upleatham, the honour undoubtedly belongs to Cleveland. The dimensions of Culbone Church are 33 feet by ?2 feet. It is a perfect little building, in fact a miniature copy of the neighbouring church of Porlock, it is said the sun only shines upon it about three months in the year.

Some say the smallest church is Wasdale, in Cumberland, but as its dimensions are 42 feet by 16 feet, it exceeds Culbone. Lud Church, in Yorkshire, stands on the battle field of Towton, and is said to be another claimant. It was built on the exact spot where Lord de Clifford fell on that day – March 29. 1461. It was built immediately after the battle of Towton and once a year on the anniversary of the battle, a memorial service is held. This small church accommodates a congregation of from 25 to 30. 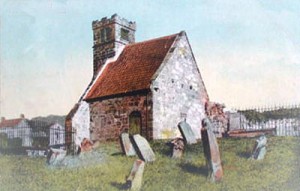 Hascombe is the smallest parish in England, and its church has strange privileges, but I do not think it can lay claim to having the smallest church. This church is subject to the visitations of the Archbishop of Canterbury. This tiny church consists of chancel, nave and north aisle, and was dedicated to St. Blaise on July 19, 1328. In the garden of a farmhouse at Tarrant Rawston, Dorset, is a tiny church, ivy mantled, with a red tiled rood, but no steeple. Inside there are afew old pews.
Another interesting church is Hartly Mandit, and is well worth a visit, as it has interesting doorways and windows, and a large ancient fount, with a horseshoe carved in its bow, a very unusual ornament in such a position. As all the above-mentioned churches have at some period laid claim to be the smallest church in England, I think readers will agree with me, in claiming for Cleveland the honour of having that distinction in Upleatham Church. This historic old building is only 17 feet 6 inches by 13 feet 9inches, and contains five small benches, with accommodation for fifteen people. Visitors to the district are well repaid in paying a visit to this historic old edifice.

CENTENARY OF UPLEATHAM
BUILDING OF PARISH CHURCH
Relics of the Past
(Special to the “Standard.”)

The secluded village of Upleatham this year celebrates the centenary of a progressive step in its history, for it is a hundred years since work was commenced on the building of the present parish church of St. Andrew’s. It was completed in 1837.
The church is typically Victorian, and was built by the Dundas family, who occupied the now demolished Hall. The lodge gates now somewhat decrepit are the only remaining link with the country seat of the Dundas family.
The centenary of the consecration of the Parish Church will be celebrated next year, for it was consecrated by the then Archbishop of York.
An interesting link with the past is the Norman font, now standing in the church. Ord the Cleveland historian describes it as “the most interesting in Cleveland,” and it was originally in the Norman church which stood on the site of the present old church.
The corbels, now incorporated in the old church, are also remnant of the Norman church.
Upleatham certainly did not spring up in a night. It boasts a history which takes it back to pre-Doomsday Book days. 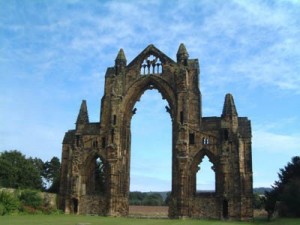 In that comprehensive record the parish is called “Upelider.” The land at that time belonged to Hugh, Earl of Chester, and of the Brus See and the descended to the Falcon bergs and Conyers.
It then passed by marriage to Sir William Pennyman, and was afterwards the property of the Lowthers, of Marske, who sold it about 1800 to Lord Dundas. The present owner is the Marquis of Zetland.
The old church, often referred to as the smallest church in England, is a 17th century building, and is all that now remains of what once the largest church between Eston and Loftus.
Founded about 1090 to 1100 -1106, I think, is the nearest date to be procured – by Robert de Brus, it was given to Guisborough Priory a little later on and enjoyed parochial rights, probably remaining dependent on the Church of Guisborough till its augmentation by Queen Anne’s bounty when it became a perpetual curacy.
Strange to relate, although not mentioned in the Doomsday Book like the village itself there must have been a church here in Saxon Days, as within the little building is part of an ancient cross dating from the 9th century.
The old church consisted of a chancel, nave, and south side. In 1684 a churchwarden William Crow by name, built the present tower and the church was raised two feet at the time. Halfway up the tower is a stone bearing this date.

It would appear that the population of Upleatham moved from near the old church in the 18th century. By the beginning of the 19th century the old church was in a ruinous condition, and some distance from the (then) new village.
In 1822 a faculty was obtained to take down the old church, but the building of the new church was not commenced until some years after this time. What actually happened seems to be that the old church was only partially pulled down; the tower and south-western part of the nave was left standing – still stands – and that part was used for services until the new church was erected.
Since the erection of the new parish church this older building has been used as a cemetery chapel only.
Writing in 1848, Ord mentions in his history about the damage done to the church by “ill-usage and mischief” in his time.
Inside the church are stone coffin lids of the 13th or 14th century. reference is made to one in the “Yorkshire Archaeological Journal,” where it says: “We may place it about the year 1260; for it shows the still conventional foliage of the early part of the 13th century, associated with form leaves of what has been termed natural carving, and which characterised the ornamentation of the early years of the 14th century.”
Hanging on the walls are the original seats -of-arms granted to the illustrious North-country families who, centuries ago owned the manor on which the church was built. There are also on the walls tablets erected to the memory of members of these families.
On the south wall is a tablet erected to the memory of George Smallwood, who died in 1680.
A further and, in this brief survey of Upleatham, a last, item of interest is the ancient village cross which stands near the entrance of the new parish church, the centenary of whose birth I am recording