SHIPWRECKS & GROUNDINGS – Wrecks Around our Coasts 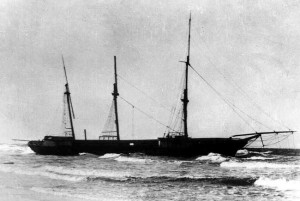 Coming to grief on the rocks at Redcar

The rapid approach of winter, the recent cold, and boisterous winds, the heavy seas, and the long list of wrecked vessels consequent thereon, naturally cause the thoughts and sympathies of all those whose location is on the coast to revert to the means for aiding their fellow creatures, who may be “in peril of the sea” and make them hope that these- though needed almost every year very frequently – may not be wanted this coming winter. What directs our attention, and that of all those who have friends who “go down to the sea in ships and do business in the great waters” – and in Redcar they are very numerous – still more forcibly to this matter is the recent publication of the Wreck Register – the “ Black List”  as it is often called for the year 1870, which shows that, although by reasons of improvements in shipbuilding and other causes, the number of casualties has not been so large as in former years, there are still numerous risks  and exposures which no human skill or care can guard against, and which must ever be the means of destroying many a gallant vessel. It is noticeable, however, that a good many wrecks have occurred through the carelessness of those in charge, or the un-seaworthiness of the vessels themselves. From the statistics we learn that the year 1870 was an exceptionally propitious one, there being fewer severe gales than is usually the case, and, as a consequence, the casualties are to a material extent diminished. It appears that the number of wrecks on or near the coasts of the British Isles and in the surrounding seas during the twelve months was 1,502, or 612 fewer than in the previous year, and that of these 411 were total losses, 160 being so from stress of weather, and the remainder from preventable causes such as carelessness, defects in construction, etc. Those lost or damaged by the above 1,502 wrecks, casualties or collisions figure for 1865, and represent a tonnage of 404,100 tons.

They are divided under the following heads….

Ships with other cargoes and other

It will be seen that the laden colliers, on account of the large number employed in the coasting trade and the general un-seaworthiness of this class of craft, have suffered very severely. The disasters to comparatively new ships also appear to be above the average.

Turning to the sacrifice of human life connected with the above, we find that one wreck in every twelve, on the average, results in loss of life, and that altogether 744 persons were drowned or otherwise deprived of life. 4,654 people were rescued, of whom 384 were saved by lifeboats, 271 by rockets and the remainder by coastguard and other boats.

Statistics like these will no doubt possess a greater interest to the general body of our readers than to the people dwelling far inland, who never perhaps see the sea at all, or only when it is calm and placid, and whose best representative of it is the sedge-choked river or the muddy canal, along with their poor type of out gallant vessels – the clumsy barge – “urges its lazy way” unaffected of the war of the elements. They cannot like our seafaring neighbours, call to mind the remembrance of some dark stormy night, when the signal gun of some ship in distress boomed forth amidst the fierce howling of the winds and the lashing of the waves, when the drum with its – alas well known – tattoo, has roused them from their beds to proceed in the cold and wet to the rescue of their endangered fellow creatures  and to do battle with the stormy elements. They can remember the times when these expeditions have been successful, and the rescued crew have been welcomed ashore, or when unsuccessful they have witnessed the ill fated ship strike against the rocks, turn over, and sink, her crew being lost – “without a grave, unknelled, uncoffined, and unknown.” How many scenes of this kind does each winter bring forth, and we should think the persons conversant with these perils of the sea would be the first to aid in all means that will prevent, or in some degree ameliorate, the destruction of valuable human life. Such we scarcely think is the case, for as the purchase of lifeboats, for instance, have been subscribed by people dwelling inland. We should, therefore be glad to see that our lifeboats are more liberally supported by our local middle class people.