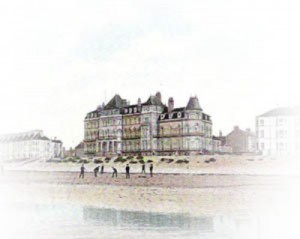 THE NEW HOTEL FOR REDCAR AND COATHAM

If any proof were wanting of the rapid progress which is developing itself in the watering-places of Cleveland, and particularly at Redcar and Coatham, it will be found in the project that has just been placed before the public for the formation of a joint-stock company for the erection of a first-class hotel at Coatham. Notwithstanding the large and excellent accommodation afforded by the present court tells, it has long been felt that a hotel of a superior character was desirable, not that any of these now in existence fell short of the public requirements, or that their management gave cause for complaint, but because the rapidly extending popularity of Redcar and Coatham, and the consequent increasing demands upon the present limited resources, called for some spirited effort to assist in extending the re-sources of these more important localities. Hence, we hail with much pleasure. The new project, believing that it will be one of the best means possible for the advancement and prosperity of Redcar and Coatham. One of the most serious drawbacks and difficulties which have helped to retard the progress of these places has been the lack of an enterprising spirit on the part of the more influential portion of the inhabitants and tradesmen. Had there always been an adequate feeling of this kind evinced in forwarding the development of the re-sources of the locality, there is no doubt their progress would have been far more rapid than it has been, and the two places would have enjoyed years ago, therefore measure of that prosperity, which has set in of late years. It was this one is of energy that back the construction of the sea-wall for years after its utility had been fully recognised, and it was through a similar lack of public spirit that we have been so long without a peer. These, we know, word projects requiring both time and money. As for the former, the matter had been before the public in some shape or another four years, and its importance, apparently Julie recognised, while it was only a narrow short-sighted, and niggardly feeling that kept back the means, as for instance, when the town failed to accept the fair and liberal offer of the Earl of Zetland, to contribute handsomely to the cost of a sea wall. We are glad, however, to find the people are waking from their apathy and realising it just appreciation of what can be done in pushing forward the interests of Redcar and Coatham. We hail with unmixed pleasure. The formation of the new company for the Victoria Hotel, and are glad to learn that so much encouragement has been given to the promoters, who are keen men of business, well acquainted with the locality and its requirements, and who, we are sure, maybe safely trusted to carry out the project to a successful issue. We are equally gratified to find that it is also contemplated to construct a promenade pier. This is just what has been wanted for yours, and what we have advocated over and over again. If there was a suitable peer at which passengers could land or embark, there is no doubt that, during the summer months, thousands of excursionists would be attracted thither by steamboat trips from the various towns and villages on the coast and Tees-side. Looking at the business capacities, local knowledge, influential position, and ready commander of the sources which characterise the whole of the gentleman who will have the project in hand, we are fully assured of its success. We look forward with more confidence than ever to seeing Redcar and Coatham, far outstripping their present proportions, and taking the position to which their natural advantages so much entitle them, as being, with Saltburn, the most eligible marine resort on the North-Eastern coast.

The former Coatham Hotel is still situated at the West end of Redcar being built in 1870, known then as the Coatham Hydro (underground stream) The builder certainly knew how to build impressive buildings. Its not know n by many people, but the hotel was never finished, with cash supposedly running short before one of the two wings could be built. (To look at the former hotel from the front it does look a little odd). The hotel had its own water supply from an underground stream. At the rear it had numerous stabling facilities. The impressive entrance to the hotel, with its large doors and entrance, matched the spacious interior with its entrance foyer; open flowing staircases, ballroom, dining room, and beautiful décor, with furnishings to match. Everything about the hotel seemed large and spacious, as though expense did not matter. The addition of the flat building to the East came later, and introduced another ballroom called the Windsor Ballroom. The then owner Charles Amer built this. It was a spacious building with dance floor, stage area, and complete with bar facilities.

At Redcar Past and Present it’s true when we say,

Please reply to this topic if you wish with your experiences and photographs.