Accreditation the Redcar and Saltburn-by-the-Sea Gazette 09/071869 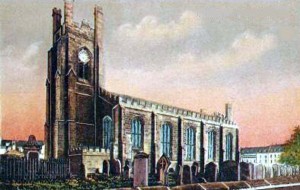 It was acknowledged by Redcar Board the necessity for providing a cemetery for Redcar was discussed. The need for one is very pressing, as the churchyard will not contain above more than 200 more bodies, and its condition was not all that could be desired; it wanted draining sadly, especially on the north side, which was very wet under ground, and hardly fit for interring corpses. The cost of maintaining a cemetery would be small, and by the time it was ready for use the churchyard would be full. Mr. Harrison said that he had no idea that the churchyard was so nearly full. He knew however that a great many corpses had been deposited during the last two or three years, and that the burial ground was not thoroughly drained for where Dr. Horner was interred the ground was very dry, and where a person who had been buried some little time before; had been laid it was to wet for anything. The Chairman stated that they could not enclose the land adjoining the present burial ground, as the school commissioners would not sanction it, in consequence of its proximity to the schools. He would call a meeting of the ratepayers as soon as possible, and learn their opinion on the subject.. The Clerk advised that first they should obtain information respecting any available sites suitable for the purpose, their cost and other facts that would be useful; then they might see the ratepayers when fully prepared to answer any questions, or meet any objections, and learn their views. The Chairman said that he had been looking about lately for a site, and he fancied that Jordison’s field, adjoining Sandy Lane would be suitable, it was neither too far from not too near the town. Mr Harrison remarked that the lane referred to bare the appellation of Thwaites Lane, and it was nearly half a mile up Redcar Lane. It was agreed that a committee composed of Mr. Lennard, Harrison, Cowl and Mallaby, be appointed to ascertain what suitable sites could be procured, their cost,&c.; and report thereon at the next meeting.

REDCAR – Eighteen Ninety (1890) and Before That