Time, which changes all things, has seen many notable changes in the Cleveland Health Resorts within the past few years. It has seen Saltburn has to fame and popularity from comparative nothingness. Where formerly there was only a bleak, barren-looking alluvial headland, over-looking the GermanOcean, there is now a noble town, having every feature of social life, and diversity of sources of recreation and pleasure which even older established watering-places cannot equal.

Foremost, of course, is the Zetland Hotel, which has a formidable rival in the Alexandra, and both under excellent management, and possess every requisite for the comfort and convenience of the many who annually visit Saltburn; while the gardens of the Improvement Company increase in loveliness every year.

Coatham, too, has risen from a comparatively humble hamlet to a large prosperous town, and the Victoria Hotel, opened about eighteen months ago, as scarcely able to accommodate all its would be patrons, so that the directors have been compelled to proceed with the erection of one of the wings – providing the superior class of accommodation it was intended to supply is really needed. 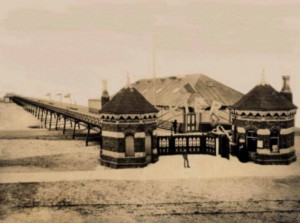 The pier here is now nearly completed, and is very liberally patronised, as also the one at Redcar, which formally opened at the commencement of last season.

If the pleasant poetical fiction about sea gods and goddesses, about mermaids and mermen, were anything more then fiction, we might tax our imagination to describe the effect upon these strange creatures of the wonderful developments that have taken place on the literal bounds of their domain. They have seen the scriptural proverb which says no man shall build his house upon sand successfully set at naught, and they have seen speculative enterprise convert a wilderness of sand hills into a neat and flourishing town. They have seen, too, what is more important. 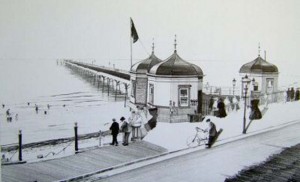 Year by year an increasing crowd of visitors stud the beach in the summer time, from “morn to dewy eve” inhaling the invigorating breezes of the sea, and enjoying in renovated constitutions the sights and simple pleasures of nature. Supposing they could put it down in figures, how would they reckon up statistically the advantages conferred on neighbouring communities by the free use of the Cleveland watering-places as health resorts? How many shattered constitutions have come down to our hygienic workshops to be repaired, and how much broken health has not only been successfully cobbled up, but absolutely made a good job of? We may safely conjecture it would be an easy matter for them to estimate the innumerable cases of averted death which have resulted from timely visits to the sea-side, and they would no doubt arrive at the result that in these beneficial influences no seasons could compare with those which are passed at the Cleveland watering-places. It is a pity that, with all the weight of their authority they are not able to make a report; vested interests would not be the only ones to benefit by this.
And now another season, big with issues of importance to all, has just commenced; and thousands of families who have been pent up all through the long dreary winter in thickly streeted towns, are, we may be assured, beginning to look hopefully and joyfully forward to the time when paterfamilias gives the order for a march in quest of health to the open spaces of the sea-shore and health, cooled by sea-spray and fine breezes, and musical with the gaiety of innocent children, and the untaught songsters of nature, Save for the unhappy dispute between the ironstone masters and the mine owners, trade is everywhere in a healthy state, and a consequence of this will be that increasing numbers of visitors will this year find their way to our pleasure resorts. It is well to know that the winter months have been spent making thoughtful provision for the comfort and pleasure of those who may favour us with their patronage. Warned by the experience of last season, the Redcar Local Board have adopted measures to remedy the deficiency in water supply to the town; a new footpath has been laid along the Esplanade; and at the monthly meeting on Monday last the surveyor reported, as the result of a house-to-house visitation of the town ship, that the sanitary requirements were in a satisfactory state. Lodging-house accommodation  has also been extended and improved , and on every hand there are not wanting signs that the people of Redcar, Coatham, and Saltburn are alive to the responsibilities resting upon them as the custodians of the prosperity of health resorts second to none in the North of England in their natural capabilities.