EXTENSION OF THE CONVALESCENT HOME. 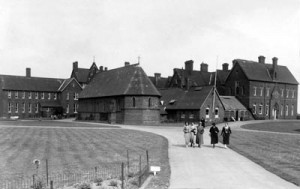 On Tuesday (02/06), the foundation stone of a new wing to the Coatham Convalescent Home was laid by the Rev J. Postlethwaite, of Coatham. The additions to the existing direction, compromise a dining room, wards for patients, a surgery, bath rooms, &c., and will cost, it is estimated, about £1,700. Accommodation will be afforded by the new buildings for 50 additional patients. The new direction will be constructed in the modern Gothic style of architecture, and will take the form of a complete wing. The present building provides accommodation for about 50 patients; and, as the facilities offered by, and advantages occurring from the institution have become more generally known, the applications for admission have become so much more numerous in proportion to the resources as to necessitate the contemplated extensions. This, it is proposed, also, to construct a chapel in connection with the House, at a cost of £400, so that the patients may be favoured with every convenience, spiritual as well as temporal. There was not a numerous attendance at the ceremony of lay the foundation stone. After the 100th Psalm had been some, the collector for the day was read, and the service was concluded by the singing of the hymn commencing “When like a stranger on our sphere.” The Rev J. Postlethwaite, next addressed those present, and in laying the foundation stone, said that the Convalescent Home of Coatham was opened about seven years ago, and was then capable of accommodating only about 30 patients. Before long, however, it was found necessary to make such an enlargement that 50 patients might be admitted; and from the opening of the home up to the present time, no less than 2,708 patients had been admitted to its benefits and treatment. During the last two or three summers, many of those who wanted admission had been obliged to wait until some of the patients had been discharged before they could be accommodated. The great object of the promoters of this institution had been to increase the number of beds and to provide the necessary relative accommodation; and although sufficient funds had not been raised to carry out their intention, yet enough had been raised to warrant the commencement of the work. Under the superintendence of Mr Clapham, plans for the extension had been prepared, which were now in the building, and open to the inspection of any friend who might be disposed to look at them. The contract for the work had been taken by Mr Kidd, of Saltburn, and although no public notice had been given of the proposed undertaking, it was highly gratifying to him to see so many friends assembled to witness the inauguration of their new building. Referring to the fact that it was customary on such occasions to deposit something in the foundation stone, the speaker produced a bottle, which he stated, contained a document which set forth that the foundation stone of an additional wing to the Coatham Convalescent Home had been laid that day. He announced, also, that it was intended before long to lay another foundation stone of a new chapel, which would be built for the benefit of the inmates, the services being at present constructed in the dining room, which was small and inconvenient for the purpose; and, as it could not meet the requirements of the present number of patients, it would be quite impossible to continue religious services next summer, as the increased accommodation would make a large addition to the patients. He asked those present, who saw and believed that the institution was, faring good on their fellow men, to co-operate with the promoters, and further the good cause the Rev gentleman then laid the stone, saying at the same time,

“I lay this foundation stone of a building for our sick and poor members in Christ, in the name of the Father, of the Son, and of the Holy Ghost.” The proceedings then closed.