COATHAM – Marshes (a letter by Antiquary)

Coatham Marshes
(a letter by Antiquary) 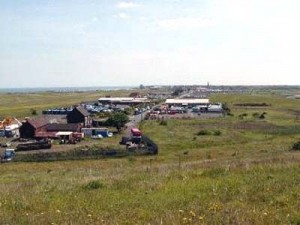 I am a visitor to Redcar in search of health and have taken up my abode in apartments that over-look the sea and the beach, and now and then lave my debilitating body in the resuscitating waves of the German Ocean. In pursuit of health I occasionally walk in the country, and find many thing to amuse and gratify my curiosity and desire for knowledge, which at my time of life (and I am verging on the allotted space) is much a thirst for information as ever. The iron hills of Cleveland have furnished me with an inexhaustible book of nature for a study. There are sermons in its stones which are pregnant with vast changes during the past – of mighty convulsions, up-heaving’s, and death in some log-for-gotten history of the earth. I read clearly that these iron hills have been formed during the severed convulsions of nature, when they were under the sea and at long intervals subsequent to the earliest creation; and that after they had been deposited in successive strata of differing material, which were either the lava or scoria of volcanoes, or the deposition from troubled water, they were up-heaved to their present position, while the surrounding land became depressed, and forms the bed of the sea in the Tees Bay, where there are remains of ancient forests sloping from the shore to deep water. There have been strata formed upon the iron stone and considerable beds of stone lie upon it. The study of the iron hills is interesting to the visitor at Redcar, where the geologist may pass many pleasant hours, and find means of enriching his museum, as I have done. My chief object in this communication is to remark upon a very singular appearance of Coatham Marshes, which during my peregrinations have given me a fine subject for investigation and research. I do not find in any work that I have been unable to consult any account that is to me satisfactory of the origin and uses of the numerous mounds which are seen on the marshes. I observe that Mr. Rudd, in “Ord’s History of Cleveland,” speaks of an ancient camp on the marshes. This camp I have not been able to find, but the mounds present to the antiquarian fine and perfect works of druidical origin. I have not been able to examine the whole of them, being stopped in my progress by a wide ditch – which I think is called in this neighbourhood a “stell” – which was not in existence at the time the mounds were made, and has evidently been made in later days to drain the marshes. The ancient Britons were not in need of entrenched camps. Their mode of life was simply a cave residence, formed by making a large circular pit, and covering it with boughs of trees and rushes. There is an appearance on one part of the marshes which induces me to think that such pits existed here. I counted seven depressions within the raised mound oblong shape; and near it there is a large stone formed chiefly of quartz, which I believe was used with others near it, to form either a druidical alter or a druidical eyst. This stone certainly weighs 10 cwt. It is thirty three inches by thirty one inches in the widest part above ground, where it is eighteen inches high. There are other stones near, and numerous fragments about, which show that they have been brought there from various place, as they are of different formations, and no stone is under the soil in these parts particularly of such varied structure. The small stone in the earth mound of a neighbouring hedge may have been part of the stones forming the walls of the pits; others, I presume, were taken away towards building a farmstead at a distance from the marshes. Not so far from this spot is a mound of a peculiar construction. It is several hundred feet in circumference, about ten or twelve feet high at the east side, and gradually sloping back to the west: and this is the general character of all that I examined. Surrounding this mound has been the moat, the remains of which are very distinct; and at the west side is a raised entrance across the moat. Round others I observed indications of a similar kind. One mound which was more than an acre on the surface, sloped towards the centre, in which was a large, round, deep pit. This I conclude was made to catch and retain rain water; these mounds (in Norman Language “cotes”) are all of human origin, made with design. But what were their uses? We can now only conjecture. They do not appear to before habitations. Their inclination from east to west would indicate religious uses. The Druids were, in fact sun worshipers. All their open temple remains in various parts of the kingdom have had alters east, south, and west. In those days the oldest writers tell us, they were accustomed to have holocaust sacrifices in immense pyramidal cages, where human victims were burnt, These “cotes” may have been dedicated to those sacrifices during successive years, and used by different tribes of the aborigines, as Tacitus informs us our forefathers kept up distinction of tribes, as the Scots did their clans. I believe to have been 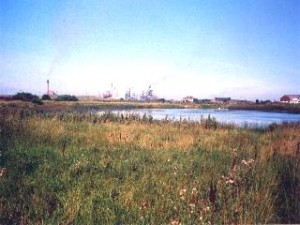 Once a vast open space of marshland taken over by heavy industry. The location above is now a Nature Reserve for Wildlife, along with other marsh land in the Coatham and Warrenby area

the origin and use of these “cotes.” I use the word “cote” advisedly; as there can be no doubt these mounds have given the name to Coatham, which should be spelt “Coteham.” There are neighbouring places ending in the name ham – Kirkleatham, Upleatham, &c. “Ham” is a Saxon word for “a plain” or “a waste.” “Coteham” is a sufficient name for the meadows, without adding them marshes which is repetition. Those “cotes” must have existed at the time of the Norman invasion. That person finding the “ham” full of the mounds, called it Coteham – “Cote,” in Norman meaning “hillocks,” and is frequently applied in France locally to little hills. One of the French departments is called “Cote –d-or,” or “Golden Hill.” Such are the results of my investigation of this extraordinary plain. I was pleased with the many little incidents during the visits to the “ham.” On one visit I sprung a couple of snipe; on another visit – sprung a whole brood from the same spot. There were four young ones, and two old ones. The young ones could only flutter to a short distance, when they dropped together. This proves that snipes breed in England, a fact often disputed. I also sprung a covey of partridges. The old birds rose within a yard of me, and flutterer low, as though wounded. I knew this was the nature of the birds, to lure me away from their nest or their

young, and fearing I might tread on one or the other, I looked carefully round, and saw several young ones not a month old. Three of them lay in a hole at my feet, a few inches distant. I put my hand towards them, when they sprung away fluttering for a few yards, and were lost in the grass. I also saw two weasels chasing a young rabbit. They did not seem to notice me, as they past within a few feet, and I knocked one of them down with my stick, and left it dead. I have penned these desultory remarks to commit my thoughts to paper, and they may furnish thought for your readers –

Accreditation The Redcar and Saltburn-by-the-Sea Gazette 10/09/1869.

To the editor of the Redcar and Saltburn-by-the-
Sea Gazette.

Sir, In last week’s Gazette I perceive a letter upon the subject of Coatham Marshes. Now it strikes me as being a decided case of “A. D. L. I,” i.e., “Aiken Drum’s Lang Laidle.” For the information of your correspondent, I would say that upon a site not far from the Marsh house stood a windmill, accidentally destroyed by fire upwards of 40 years ago. The remains of it may perhaps account for the stones and earth mounds he supposes to be “druidical.”

In a like manner the circular depressions mentioned are believed by some to be the remains of ancient salt-works.

If your correspondent is interested in the matter, these hints may lead him to a closer examination: and a little enquiry amongst the old inhabitants will bring some very amusing and interesting things to his notice, not mentioned in any of the Guide Books.

I am, Sir, yours respectfully,