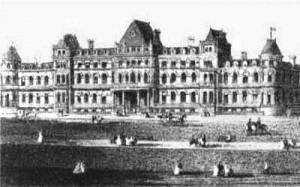 Coatham Hotel impressive when it was opened. This picture shows the (East Wing which in fact was not built owing to cost, but still stands today on the sea front, still in use as luxury flats.

A few years ago an isolated hamlet, surrounded by a barren expanse of sea-bent, is now a thriving and favourite sea-side resort to thousands of summer visitors and rapidly assuming the features of a settled town, the permanent place of residence of numerous families connected with the Cleveland Ironopolis. The magnificent promenade recently constructed by Mr A. H. T. Newcomen, of Kirkleatham Hall, has proved a great attraction to the place; and a Limited Liability Company is now being formed, we learn, for the purpose of erecting, in juxtaposition to this promenade, a first class hotel. A site having frontage to the sea of some 200 feet, and containing a total land area of 2,340 square yards, has already been secured; a Provisional Directorate, embracing many well known local names, and of which Mr Newcomen and Mr. Dodds, M.P., are respectively chairman and vice-chairman, is announced; and Saturday next is fixed as the last day on which applications for shares can be received. No “castle in the air,” this hotel at East Coatham! It is to be named “Victoria”; and, already, the formation of another company is contemplated – for the purpose of erecting a splendid promenade pier, to extend about eight hundred yards into the sea from the front of the Victoria Hotel. The latter project had need for hot haste; for East Coatham is to have its Alexandra “ready for the reception of visitors and others next season.” – Northern Echo (Accreditation)