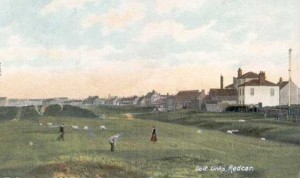 One day in 1886 when some young men were playing hockey on the Coatham Links, Captain Williams, who was the head of the Coastguards at Redcar, brought our a cleek and a gutty ball and showed the hockey players what could be done with them, and from that day the hockey players deserted their game and took up golf.
This story of the origin of golf in Redcar is the introduction to a brief history of the Cleveland Golf Club which appears on the clubs official handbook just issued. The enterprise of the Club Committee in issuing this book in a new and revised form will be commended, and the handbook will doubtless prove of great interest, not only to members of the club but to golfers generally.
The history of the club is followed by a description of the Cleveland course, with much useful 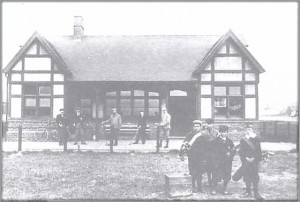 information, and the booklet has an appendix on golfing hints by Henry Cotton.
The tale of the club’s history continues to the effect that in 1887 the farmer who had the eatage of the dunes from the Kirkleatham Estate objected mildly to the trespassers, so it was decided to form a club and pay rent for the right to play golf and construct greens. Soon a number of other people joined the former hockey players, and from that beginning golf of a sort was played.
On Tuesday, May 3, 1887, a meeting was held in the Lobster Hotel, at which the composition that “the gentlemen present form themselves into a golf club” was carried, and the first club in Yorkshire was formed. Mr. Arthur Pryce presided at that meeting, and those present were Messrs. C. William, W. Williams, A. O. Cochrane, A. C. Tofts, W. MacKinlay, J. Roddam, J. W. Kyle, J. M. Meek, T. W. Ridley, T. W. MacFarlane, C. D. MacKenzie, and R. F. Helm.

The club began with nine holes, without a professional or groundsman, but the links possessed all the inherent qualities necessary to good golf and practically made itself.
The War was the club’s first real setback. The troops stationed in Redcar used the links as a parade ground, dug trenches, and made machine gun emplacements, but the damage they did was slight compared to that done by the War Office who, after the bombardment of Hartlepool, decided to erect a 9 inch gun on the twelfth green to defend the south of the Tees. This immediately spoilt four holes.
The new clubhouse completed in 1914 but never used, was immediately commandeered and occupied by the troops. In 1915 while still in their hands it was burnt to the ground.
Like most others, the course was neglected during the War and the situation which faced the Committee immediately after was very serious. They set to work with a will, however, to bring it back to its pre – War excellence, and after many setbacks, including a disastrous flooding, it is now as good as ever.
The sixth Yorkshire Championship meeting at Redcar in 1933 showed that the clubhouse accommodation was inadequate, with the result that in 1934 a new clubhouse was built opened by the Club President (Mr. H. A. Shaw).
Captain C. E. Badcock is at present captain of the club, and Mr. T. K. G. Ridley Ho. secretary.

Before the golf club was formed the dunes and lands, on which the Cleveland Golf Club was situated, belonged to the Kirkleatham Estates. The grazing rights for the particular land which formed the start of the golf club belonged to a farmer called Suggett. Mr Suggett objected to people using his grazing lands for the game of golf.

A Captain Phillips who was head of the Coastguards at Redcar joined them at the time. He had been at Alnmouth where they had a golf course. He brought along with him a ‘Cleek’ and ‘Gutty Ball’. The farmer Mr Suggett indicated that if a formal club was formed and the necessary ground rent paid to him, he would have no objection to them playing on the land. (Little did he or they know what was to come about?)

On the 3rd May, 1887, a first meeting took place of the golf club where a proper committee was formed along with 180 members. So the Cleveland Golf Club was formed. How good was the course was best described in an extract from a letter sent to the then Yorkshire Post, by C.A. Ridley.

“In those early days ‘golf architecture’ was an unknown art. There was no such thing as an incorrect place for a bunker. The correct position was anywhere that nature had put it, and if a player’s found a home in a bunker, so much the worse for him. He blamed himself – or fate – seeing that there was no one else to blame. But the quality and strength of his language was quite equal to that of any linguistic expert of the present day”.

Little did he know, what was going to happen, and that this land would be the ideal setting for the only championship links course in Yorkshire today.

The First World War saw gun emplacements on the course to guard the entrance to the River Tees, and the coastline. The Second World War was to see further disruption to the course in that it was covered in barbed wire and land mines for defences. The clubhouse was commandeered by the Armed Forces, and alas the clubhouse facilities caught fire in 1919, and were totally destroyed.

In 1934 a new clubhouse facility was built which was much larger and more comfortable. It saw the

introduction of Majuba Road, and the club paying a ‘peppercorn rent’ to the council for the lease of lands along the stray and dunes. The course was extended to eighteen holes.

Several old rights of way still exist across the course, and the building of Majuba Road saw the 1st and 18th holes on the East of the road with the other 16 holes being on the West of the road. Recently the ‘peppercorn rent’ again came up for review, and as a result new club house premises were built on the West side, and the 1st/18th holes land handed back to the council, in exchange for more land on the west. Majuba Hill is now the first competition tee-box of the golf club, and overlooks the whole course.