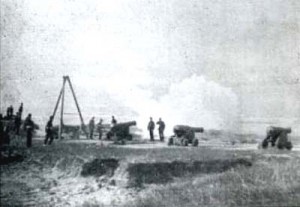 The inspection of the 1st North York Artillery Volunteers, by Colonel Fitzhugh, R.A., Commanding Auxiliary Artillery in this district, will take place on Saturday, next, at Redcar. A special train will bring the greater part of the brigade, arriving at Redcar Railway Station about 3 p.m. The brigade will be formed up at the station, and marched to the race-course, and will be inspected by Colonel Fitzhugh, and will go through some battalion manoeuvres. They will then march through the town to the battery, and go through gun practice and repository drill, the latter consisting in mounting a heavy gun from the ground on its carriage. The brigade will, after the inspection is over, be marched back to the Central Hall where dinner will be provided for members of the corps.