The sinking of a smack

The following photograph (copyright of museum, although not the ‘Caledonia’) was gratefully supplied to us by the Aberdeen Maritime Museum. 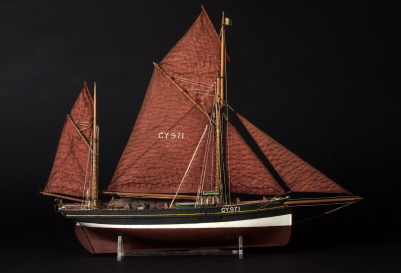 These type of vessels were to be seen around the Tees Estuary during the Late 1800’s and early 1900’s. Photograph courtesy of the Aberdeen Maritime Musem

A smack was an English sailing vessel that was used to bring the fish to market for most of the 19th century and even in small numbers up to the Second World War. The smack was originally cutter rigged, until about 1865 when the smacks became so large that cutter main booms became unhandy. From then on cutters were lengthened and re-rigged and new ketch-rigged smacks were built, but the boats varied from port to port. Some boats had a topsail on the mizzen mast, while others might have a bowsprit carrying a jib. Large numbers of these boats could be seen operating in fleets out of places like Brixham, Grimsby and Lowestoft. The sails were usually red ochre in colour, which made them a picturesque sight in large numbers. Smacks were often rebuilt into steam ships in the 50s. Some of the old smacks have been re-rigged into ketches (or were never made into steam boats) and are now used as training boats for young sailors.

The sinking of the smack ‘Caledonia’ Redcar Rocks (Taken from The Redcar, Coatham and Cleveland Literary Magazine 15th July 1902)

March, 27th, 1808 – The smack “Caledonia,” Hill master, of Aberdeen, from Aberdeen to London, with a general cargo, with a general cargo, wind East, wrecked on Redcar Rocks. Seventeen lives lost. Six of the crew saved. The disastrous wreck of the “Caledonia” is probably one of the worst that has ever happened at Redcar. It is actually the worst wreck of which there is and define record. John Hutton writes thus concerning it:-

“In March, 1808, the Caledonia, a stout vessel from Aberdeen, for London, hovered a day or two near the shore, and on the night of the 25th, being rather careless in their reckoning, the vessel touched upon these rocks. The whole crew were asleep, except the man upon the watch, who not apprehending danger, was unwilling to disturb them. There were twenty three persons on board.

Danger increasing, he awakened the people; they fired one gun distress, which was not heard on shore, it being midnight. The people urged the Captain to fire again, who refused it. Their situation becoming desperate, he ordered them to fire, but, alas! The powder was wet. Their danger was extreme; the vessel was going to pieces. Sixteen took to the boat, and were all lost.

Morning approached, and their dreadful situation was seen, the lifeboat heaved out, and the remaining seven with great difficulty were saved.

The dead bodies of ten were found, brought and laid upon a bench at the Red Lion in Redcar; those of the other six were never found.

Their friends were written to: two gentlemen came from Aberdeen, ordered their funerals and discharged the expenses. They now lie in Mark church–yard.

Melancholy curiosity induced me to visit their tombs, They lie five in a row, a yard and a half asunder; and four feet below them lie the other five in the same order; two of them have head stones, Captain Booth, aged 50 died March 26, 1808; and – Burnett, Esq., aged 50, died March 26, 1808 and – Burnet, Esq., aged 18 years. This young gentleman was probably a relation of Bishop Burnet, as they were both of the same place. The names of the ten were John Mather, John Clay, Thomas Henry, John Burnet, William Heeley, William Pee, William Philips, John Runsey, John Booth, and Samuel Mackey.

The Caledonia, I am told, split horizontally, and drifted a mile or more, and the lower part still lies in a chasm in the rock where she was wrecked. I saw two hundred pieces: one part of a mast 50 feet long, which now lies in the sands, but is sold for six pounds.”

Old Mr. Hutton- he was over eighty when he wrote – then proceeds to moralise as follows:- “ There is nothing easier, says Lord Bacon, than to tell a man how he should have acted, when a thing is done; but nothing is harder than to direct the best way before it is begun. It is, however surprising that the people of the Caledonia should have been so completely off their guard, as all were asleep except one ignorant man. They knew the coast, had hovered about one or two days, were well acquainted with the extent of Crab-Scar, for they must have seen its full dimensions every ebb. Though the considerate man will make great allowance for the weakness of human nature; yet he cannot peruse this melancholy tale without sorrow. He cannot read it without blame. There was no storm, and I was assured the tragical accident arose from neglect. The unhappy Captain must have forgotten, that not only his own life was at stake, but that of others depended wholly upon him for safety. They were neutral sufferers and deserving of more pity.”

It will be noted that the Record kept by Mr. Coulson states that seventeen lives were lost, while Hutton says sixteen. In either case there was a deplorable loss of life. The names given by Hutton do not in some cases agree with those entered in the parish register book at Marske. The names according to the latter were as follows. March 30 – Capt. John Booth, of Aberdeen. March 30 – Capt. Wm. Heley, of the Caledonia, smack, of Aberdeen.

It will be seen, too, from this that the surname of the master of the “Caledonia” was Heley, and not Hill as entered in Mr. Coulson’s Record.

We are indebted to the Rev. F. Grant Hames, Vicar of Marske, for the extract from the register.

Richmond also notes the wreck of the “Caledonia” but briefly in less than a couple of lines. He says, “Out of 29 passengers and seamen only 6 saved,” which is an incorrect statement. The “Book of the Lifeboat” (p.120) says that portions of the granite with which the “Caledonia” was laden were used in paving the footpaths in Moore Street, Redcar, and were only removed about 1890, and that odd pieces were, at the time the book was published, viz. 1894, still to be found as relics of the catastrophe.

Many people in this area are not aware of what was a significant shipping disaster, immediately off our coast that amounted to a great loss of life. It can be further pointed out that since this vessels name came onto the ‘Shipwrecks’ section of Redcar.org, a living relative in Texas USA has been traced to one of the deceased crew.

It is with deep concern we have to annouce the loss of the Caledonia Smack, of this port, Captain Heley on her voyage from hence to London. She sailed on the 17th, ult. with valuable cargo, and having on board a crew and passengers to the number of twenty three persons. After encountering very boisterous weather, she put into the Firth of Forth, whence she proceeded again on the 23rd, and at 11 o’clock on the night of the 26th, in a hard gale from E.S.E. unfortunately struck on the Redcar rocks, three miles south of the Tees, on the coast of Yorkshire. Upon the vessel’s striking, the Mate had both his legs broke by the falling of some part of the rigging, and died soon after. Sixteen of the crew and passengers betook themselves for safety to the rigging, the tremndous sea then breaking half-mast high over the vessel. In this very distressed situation, the Caledonia beat upwards of a mile over the rocks; during which time, Captain John Booth, a passenger, being exhausted with cold and fatigue, fell from the rigging, and was drowned. Soon after this awful period, the mast went by the board, when, dreadful to relate, they were all swept into the merciless ocean! The remainder, consisting of two seamen, and four passengers, had lashed themselves on deck, and, after enduring the greatest hardship, were brought on shore by to boats, at seven o’clock next morning, in a very exhausted state. Several gold and silver watches; part of her valuable cargo, have been saved, but the vessel is a total wreck. Several of the bodies have been washed ashore, and properly interred, among which are those of Messrs Burnett, Henry; and also Captain Heley, and Booth, with the mate and four seaman

The following is an accurate list of survivors and unfortunate sufferers:-

The Literary Magazine states likewise, but adding a John Clay, William Pee, Samuel Mackey which are mentioned but not accounted for making a total of 13. The Aberdeen Journal states that 17 died (see above)

Redcar.org would like to acknowledge below the help and assistance given by the below people. Aberdeen Journal Newspaper of 1808. Aberdeen Maritime Museum Aberdeen Art Gallery & Museums Collections Redcar Reference Library The Redcar, Coatham and Cleveland Literary Magazine J. Webb F.Brunskill.

Footnote by Admin. Quite honestly, I do not think we will ever get into the position where we can state quite confidently we have covered all the events as to what happened to the Caledonia, and never will.

Many thanks must go to John Webb for bringing to us the above facts, and his searching of records, both the above, and on our discussion board. I can assure you, that getting further into a subject via surfing the web sites, and archives, is no easy job.

INDUSTRY – Peat as a smelting fuel