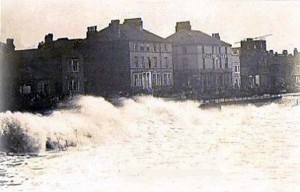 Unusually high tides attracted hundreds of sightseers to the sea wall on Sunday afternoon and dozens of children with a sense of adventure established themselves on small islands and other points of vantage which offered the risk of wetting. These tides which lasted four days, are known locally as moon tides, and occur at set periods during the year. The Sunday afternoon tide was one of the highest Redcar has known. Heavy breakers crashed over the sea wall in parts, and by the paddling pool the waves were coming straight over the narrow pathway into the pool. The pier was crowded with people who wanted a closer view of the magnificent waves. The tides do not catch the fishermen unwary and most of the lobster pots were taken up. It is rather astonishing that there were no accidents as the number of children playing on the sands and near the pier girders was too large to be comfortable.

REDCAR – As It Is