2012/JUNE 2013 An introduction to the new Redcar Present, with the new buildings and architecture along the Promenade and sea front area. We have set out a group of photographs and information on these projects, some which are now open to the public. Other photographs will be shortly available. 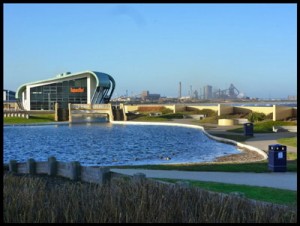 Tuned In@MyPlace arts. Ideally suited for person from 13 – 19 years-old who are interested in music and drama to film making and theatre production. Built over the old swimming baths and within the Coatham Enclosure the building contains:-
A performance venue for theatre, dance, drama and music.
A recording studio.
A radio studio.
An arts and craft room.
A media suite.
A resource room with computers, adaptable as a teaching space.
A chill-out area for socialising also suitable  for working with small groups. Within this space are two “pods” suitable for confidential discussions.
A beach-side cafe facility. (Accreditation R&C.B.C) 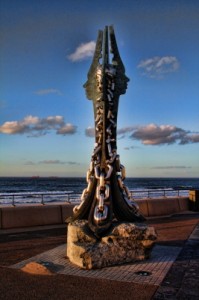 ‘Sinterlation’. Erected at the west end of the near to the penguins and band stand is a new sculpture creator Ian Randall. It is a sculpture designed to reflect the town’s history, with large stainless steel chains reflecting the steel industry, the nearby blast furnace, and the relation between the town and the fishing fleet. During the middle to late of the 1800’s the gentlemen and ladies would start at a point nearby (Coatham Pier then walk along the seafront in the Sunday best regalia, to a wooden fence at the East end of town (Start of The Stray) touch the fence with their cane or brolly, then about turn, and walk the Promenade again back to the Pier. The walk was called “Touchwood.” 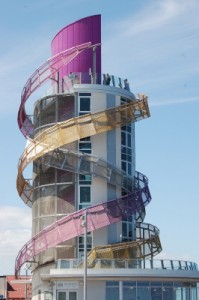 The Beacon
The Beacon is 80ft high and has seven floors.
There are 132 steps (and a lift!).
The Beacon took 12 months to build.
It includes a two-storey café with open terraces offering 360 degree views.
There are four floors of business space.
A sky lounge for meetings and events.
The top floor is an open roof terrace offering fantastic views all year round
Eco features include an energy efficient heat recovery system and solar reflective glazing
The Beacon will be included in a LED lights installation which runs the full length of the seafront to the bandstand
The project is part funded by the Council, One North East and the European Regional Development Fund 2007-2013.  (Info Accreditation R&C.B.) 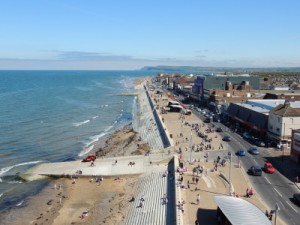 Taken 08/06/2013 from top of The Beacon. Showing the extensive refurbishments to the sea wall, and promenade eastwards. New Promenade and Sea Wall Defences.

The new sea defences and the Promenade. A joint scheme between the Environment Agency and R&C.B.C, the new sea defence wall and promenade, can be seen stretching for 2.7km’s from the top of The Beacon, from Coatham in the west, to the east end of The Stray. The £30 million. Part of the new scheme includes The Palace Hub, TuneIn@MyPlace, The Beacon, new weather shelters, seating, and water fountains.