REDCAR – Where Shall We Spend Our Holidays

WHERE SHALL WE SPEND OUR HOLIDAYS?

This is a question frequently asked by numbers who are in pursuit of health and recreation. Many and beautiful, on this northern coast of ours, are the seaside watering-places, and each has claims peculiar to itself; but our purpose at present is to notice Redcar-by-the-Sea. Those who have once visited Redcar seldom fail to make a return visit. Numbers of faces and figures can be recognised in this increasingly-popular watering-place which has made their appearance year by year for more than a quarter of a century.

Dr. Ellis. F.R.C.S., Edinburgh, Author of Medical Guide to the principal health resorts of Northern England, Licentiate of the Royal College of Physicians, Edinburgh, late on the Sanitary Commission of the Lancet, in writing of Redcar, says:- 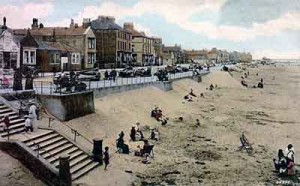 “It is situated near the margin of the fine sands of the German Ocean, seven miles north of Guisborough and north-east of Middlesbrough, with a population of 6,400. It possesses advantages of no mean order for rendering it a first class seaside bathing place. The air is peculiarly bracing and tonic, as well as being possessed of a powerfully alternative action, and is well suited for people suffering from debility from any cause whatever.”

Surrounded as Redcar is by great natural beauty, with the noble range of Cleveland Hills in the background, and sweet and cultured vale of Cleveland in the foreground, together with many places of great historical interest in the immediate vicinity, it has all the qualities for rendering it a place at once healthful, interesting, and attractive. The sanitary arrangements are under the management of an excellent Local Board, and are all than can be desired. No better proof of the healthiness of the town can be given than that of the very low death rate for the part year, as supplied by Mr. J. H. Bennett, M.D. – viz, 11.5 per thousand

The water supply, obtained from a spring in the Cleveland Hills has for some years past, owing to mining operations, been very unsatisfactory. The defect, however, is now completely remedied, and an abundant supply of the finest water is conveyed to every householder. An analysis of the water has recently been made, and the letter containing the result follows.

We hereby certify that we have analysed the under mentioned sample of water and that we find the following results.

Sample of Redcar water taken from the spring at Upleatham.

Chlorine in chlorides 2.550 grains per gallon;

This is remarkably pure water and of the very first class for domestic purposes, it is also a very refreshing drinking water.

The sands at Redcar and Coatham are unequalled for firmness, width, and length, and are specially favourable for invalids and children, being easy of access and everywhere safe, clean, and dry; whilst the strong and vigorous can have, close to the sea, exercise to almost and extent.

At low water and immense bed of rock is laid bare, which proves a very fruitful source of pleasure and interest to holiday-makers and naturalists. It is covered with every variety of algae or seaweed, shell fish, and other marine productions and crab fishing is also a very favourite and profitable pastime. The bathing and boating facilities are both excellent and safe, and are under the superintendence of thoroughly practical people. There are three lifeboats in the place, and an unusually large number of fishing and pleasure boats, whilst, to the delight of many, large and commodious steamers frequently ply between Redcar and various important seaports towns in the north.

There are two beautiful piers on which visitors can promenade and listen to the strains of the bands of music which play during the season. The sea abounds with fresh fish of every description. It can be had fresh from the boats every morning, whilst those who prefer the pleasure of catching for themselves  will find every facility for so doing from either of the piers or by hiring one of the many boats specially fitted up for the purpose. The Esplanade is well laid out, is a very enjoyable walk and extends about a mile along the sea front of the town. It affords a full, pleasing, and most interesting view of the German Ocean. The lodging house and hotel accommodation will compare favourably for comfort and charges with any other watering place in England. The Hydropathic Establishment situated close to one of the piers, is a favourite resort of visitors.

There are three churches and a number of other places of worship, representing all denominations. One of the churches is connected with the noble Convalescent Home at Coatham. The town is well supplied with all classes of tradesmen, and visitors will find no difficulty in procuring everything which will add to their comfort and enjoyment. Two newspapers are published weekly, viz., the “Redcar and Saltburn-by-the-Sea Gazette” and the “Redcar and Saltburn-by-the-Sea News,” containing all local information and a complete list of newspapers. Daily papers of every kind are always on sale. There are several circulating libraries in the town, and a most commodious reading room, with all the usual etoctras, of such an institute; also an increasingly prosperous branch of Young Men’s Christian Association.

Redcar is favourably situated as a centre for excursions by rail, or sea to towns and places of interest in the neighbourhood. The train and postal services to and from all parts are very convenient, and special facilities are afforded by the railway companies for season tickets.

We cannot better conclude our notice of this watering place than in the language of John Walker Ord, Esq., F.G.S.L., who in his “History and Antiquities of Cleveland.” Thus feelingly concludes an elaborate notice of Redcar:- “We have,” says he, “Been somewhat prolix in our notice of Redcar, but out heart hovers o’er it with all the yearnings of youthful affection. From earliest childhood we have wandered yearly on its sea banks, gathered lovely shells on the silvery beach, sailed on its familiar waters, and at at morning and evening gazed with rapture on the unparalleled glory of its rising and setting suns…. The main attraction at Redcar, next to the sea, is the beach, which is broad, firm, and smooth, affording a promenade which extends from Teesmouth to Saltburn a distance of ten miles. The sea prevents a vast and magnificent spectacle, being studded with vessels of every of every variety and size passing and re-passing at greater or less distances east and west in constant procession. The pretty village of Seaton and the ancient tower and towns of Hartlepool appear on the horizon; the mountains of Durham and Northumberland stretch westward and northward in the far distance beyond the waste waters, whilst eastward the enormous precipices of Huntcliff and Rawcliffe tower in defiance across the waves. Southward are numerous delightful drives to Upleatham, Wilton, and Skelton. Kirkleatham, Guisborough Ormesby, each presenting natural scenes of unapproachable beauty.