Many thanks go to one of our visitors to the site HB for the below, which are extracts from the original minutes.

At, the time of the formation of The Redcar Amateur Swimming Club in the 1920’s there were no baths in the town so the club provided the town with something it needed i.e. changing rooms and safe swimming for its members. In the late 1926’s a large hut was 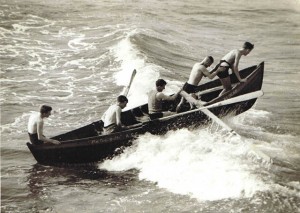 erected about 75 yards east of the Pier. It stood on wooden piles, and weathered many storms. The President at this time was William P, Nichols, the editor of Redcar’s paper, The Cleveland Standard, and the Secretaries M & Mrs. F, Brown. It catered for Ladies, Gents and children and the subscription was 2s/6d per annum for senior members. Initially the Clubhouse was only open at pre-specified times but, as time progressed, various trusted members were issued with keys and by this means the Clubhouse could be open all day. Membership increased. and by the outbreak of War in 1939 stood at about 150 – 200, Shortly after the outbreak of War, the Army, resident in Redcar, wrote to the Club stating that the Clubhouse would have to be taken down as it might be of use to the invading enemy Unfortunately, the letter did not arrive in time for the Club to do anything and that was only known was when a junior member informed the Secretary that the soldiers were busy “knocking the clubhouse down”, On going down to the beach, the clubhouse was found to be more or less demolished, and a lot of the gear was either lost or damaged, The Army said 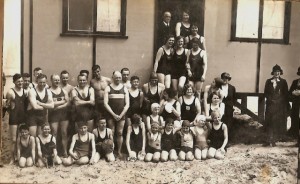 that they would re-erect the clubhouse an any site away from the coast but, as from that day, no-one would be allowed on the sands. There was not much point in re-erection as there could be no swimming. At the end of the War, a claim was made on the War office for the total loss of the clubhouse, and its contents, which became a long drawn out process. At long last, money was forthcoming and, thanks to the then President, Mr. Theodore Shewell, an ex-Army Hut was secured from the Darlington Area. This was erected on the former site by a contractor but on a concrete table 10″ thick with 21 Ferro-concrete piles. The members then got busy doing the necessary decorations etc, and the Club was once again back in business However, in the 1953 storm which did damage all over the Country, the Clubhouse , its contents and foundations were all destroyed. The Club sent out over a hundred letters asking for donations towards the restoration. Various dignitaries, firms, shops etc, and the yield was good, but the bulk of the money came from The Lord Mayor of London’s Storm Appeal Fund. The Corporation would allow the Club to re-erect on the old site but it was decided to seek a site along The Stray. The corporation said this was not possible owing to the Lord Zetland Covenant which, in short, stated that there had to be an unobstructed view seawards from the Coast Road, but it could be erected east of Green Lane on the sandbanks, but, owing to the aforementioned Covenant, would have to be out of sight from the Coast Rd. It cost the Club £135 for the site to be excavated, and this was a lot of money at that time, After a lot of work had been done decorating etc by volunteers, members started to re-join despite the fact that the Clubhouse was now a long way from the centre of the Town. However people had a good time with the facilities which were 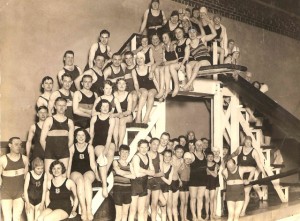 provided i.e. safe swimming and a table tennis-it was even possible to take ones meals down there cooking them on the premises, and many families s took advantage of this. Various functions were held and perhaps the best instance was the Annual Fish & Chip Supper at the Clubhouse on Guy Fakes night for which “Fish & Chips for 135people” had to order the day before to enable the fryer in the Town to have them ready for collection at 7.30 p.m. The Club always had a monster bonfire, the bulk of the fuel being “engineered” by one or two members from local works. Vandalism was getting going by the early 1950’s and the Clubhouse got its share, windows being the main target, but now and again the premises were broken into damage done and property stolen. On one occasion a prisoner on the run broke in at night, helped himself to the biscuits and hot drinks which he made on the Club stoves, and slept the night, but was seen leaving the Clubhouse about 5 .30a.m. by some workmen who were waiting for the bus at Green Lane. They reported it to the Police and the man was caught almost on his own doorstep. The Club always had a safety boat, and even this was subjected to an attack by vandals charging at it with pieces of piping which had been part of the war time defences against tanks etc landing on the shore. The Clubhouse eventually came to an end by fire caused by vandals. The Club started as “The Redcar Amateur Swimming Club” but when Redcar Baths’ Club was formed in the 1930’s under the name “Redcar Borough A.S.C.” it was changed to “The Redcar “Seagulls” A.S,C, During its existence there was not one bathing fatality but members often were instrumental in helping other people in distress. On Sunday the 18th October 1981 a cheque for the sum of £852.70p was handed over by Mr. George Watkins, a trustee of the Redcar Seagulls Amateur Swimming Club, to Captain D.L. Lee, Secretary of the Redcar Branch of the Royal National Lifeboat Institution. The informal handing over of the cheque took place at the Lifeboat Station in Redcar and was done in the presence of several ex – members of the “Seagulls” club and members of the lifeboat crew. The handing over of the cheque being the balance of the clubs funds marked the final chapter in the history of Redcar”Seagulls” Amateur Swimming Club. We asked the question who the ‘Seagulls’ and we were got the answer so there are people out there who have a vast amount of knowledge for our site. 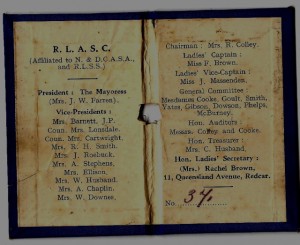 PLEASE if you have anything which may help our site no matter how small, drop us an e-mail

If it brings back memories for you please let me know.