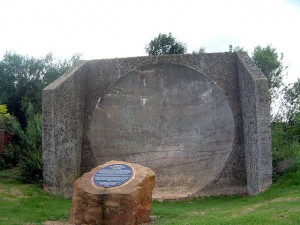 This structure is a Sound Mirror or detector, built by the Royal Engineers in 1916. It was part of an extensive Zeppelin and enemy aircraft detection system deployed down the East Coast of Britain during the First World War. Zeppelins raided the North East Coast 15 times between April 1915 and November 1917.

The sound of approaching aircraft was reflected off the concave ‘mirror’ surface and received into a trumpet mounted on a steel column.

The trumpet was connected to a stethoscope used by the operator or ‘listener’, and the part of the dish that produced the most sound indicated the direction of the approaching aircraft. Advanced warning of an imminent attack could then be given to local people.

By the early 1940’s sound detection technology was being replaced by ‘reflective detection finding’ now known as radar?

Location – Approaching Redcar from South on East/West By-Pass A174, turn (at roundabout) B1269, immediately turn Right at next Roundabout into Redcar Road. Travel to next Roundabout turn left into Greenstones Road. Fourth on right is Holyhead Drive.

Sound Mirror System immediately on right hand side.  (Beware of traffic. Please do not block junction)

WEATHER – The season so far Redcar