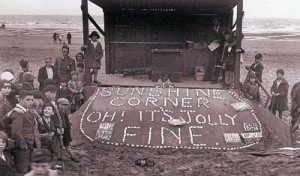 It’s for children under ninety nine

All are welcome seats are given free

Redcar Sunshine Corner is the place for me

How many times have local people sung that, and thought where does that come from? Sunshine Corner was a place on Redcar Beach from 1900 through to 1950, where young and old, went along for entertainment and of course a religious service. The Sunshine Corner was a popular entertainment, and consisted of a wooden stage, with a corrugated sheet roof over. Although a simplistic stage, it stood many a good high tide, and was always in action soon afterwards.

Whether “Uncle Tom’s Cabin will again be the Mecca of the holiday children during Whitsuntide or not depends on a matter of £30.
For several years, Mr. Tom Thompson of the Sunshine Gospel Mission, better known as “Uncle Tom” because of his popularity amongst the children in Redcar and children from all parts of England who visit the town on holiday, has organised children’s groups at his hut and department on the Redcar sands. But in the early hours of Wednesday morning a heavy sea attacked the hut and, after destroying the foundations, completely wrecked it. Twenty chairs were lost and between thirty or forty broken. The damage is estimated at about £30.
“I am not sure whether we shall have the hut fixed up during Whitsuntide,” Uncle Tom told the “Standard” reporter
“We shall do our best, but the money will not be easy to raise. You cannot insure these huts. I shall do my best, but if we cannot do it we shall have to manage without the hut. It is the first time I have known a sea as heavy as this one. The hut in the past has stood ten feet further out and been safe. The framework is all smashed but we rescued what we could.”
Uncle Tom was summoned from his bed at five o’clock on Thursday morning by a policeman, and he quickly hurried down to the shore. With the help of Mr. H. Walton and Mr. Tom Picknett most of the hut was saved. Uncle Tom was wet through in his efforts to salvage parts of the building.
The children of Sunshine Mission are ardently hoping that financial aid will come from some source or other, so that their Whitsuntide may not be blighted.
Always willing to help a deserving cause Councilor J. R. Nixon is organising an appeal for subscriptions in the hope that the hut can be quickly re-instated. His letter on another page explains a scheme which he is undertaking with the co-operation of the “Standard”