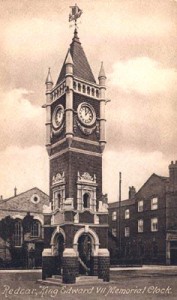 Redcar Clock
With a Tale to its Tick

Hickory, dickory dock,
The sand got in the clock.

Now that the Redcar “Town Clock” is “spring cleaned,” the clock deserves a “write up” to itself.

A little over 20 years ago on January 29th, 1913, to be precise there took place in Redcar, a ceremony which at that time was looked upon as being a great event in the lives of the townspeople. On that date the King Edward VII Memorial Clock (the “Town Clock”) was officially opened. Little did people think of the storm of criticism and mass of sarcasm and skits which in later years was to be hurled at it. Yet nevertheless despite its little vagaries, it has been a faithful servant, patiently ticking away the years, of time lacking the attention which had it been given, would have on many occasions prevent a sudden blast of abuse. The identity of the person who was broached the question of erecting a memorial clock or the idea of having a memorial to King Edward VII seems at the present moment, rather obscure.

For about two winters the Clock Committee (as it was called) held meetings at the old Urban Council offices in West terrace, and when there was no meeting the members went out collecting subscriptions. Some amusing incidents occurred to those collectors. We are told how one collector called at a house, interviewed the householder, and put the case for the clock very ably before. The man would not give a subscription then but thought he would do so after talking over the matter very carefully with his wife. Some time later the collector called again.

“We are still considering,” said the householder. So again he went – and again. Then: “We have decided to give a subscription,” said the man and benevolently handed the surprised collector 3d.

At last sufficient money was collected, and the task of erecting the clock commenced.

A design of William Duncan, F.I.A.S., a well-known architect was chosen, and the work of erection was given to the late Mr. John Dobson, the Redcar builder, whose son, Mr. John Dobson, of Granville Terrace, still carries on the business, and who, incidentally was engaged on the task of erection.

The honour of making and providing the actual clock was entrusted to Mr Robert Richardson, of Middlesbrough, who also took over Mr. A. Coverdale’s shop next door to the central Cinema, Redcar. 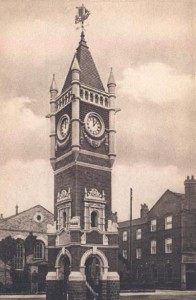 The tower was finished, the clock fitted and all was ready for the grand opening.

Wednesday, January 29th 1913 was the day appointed for the opening which was to take place at 6.45p.m. Long before this hour large crowds congregated in the near vicinity each juggling for the best view point.

For three-quarters of an hour the Warrenby band played selections of music, and at 6.40p.m. the principals of the piece began to arrive.

Suddenly a troop of Boy Scouts sounded a fanfare, bringing the multitude to silence.

One of the secretaries then publicly read the balance sheet after which the clock maker Mr. Richardson presented Henry Hudson (Chairman of the Clock Committee) a silver souvenir with which to cut the ribbon. The clock was then set in motion.

Councillor Hudson, after addressing the assembly, presented the key of the clock pedestal to the Chairman of the Urban District Council (Mr. Thos. Wrightson), and the ceremony, which long lingered in the memory of the townspeople, concluded with “God Save the King”.

News now comes that the last official action is being taken regarding the matter of the clock’s vagaries. The whole mechanism is to be cleaned and renovated. It is understood that the reason for the clock’s capers is that owing to the open structure of the tower, sand, which can apparently penetrate anywhere, has blown into the mechanism with consequent trouble. 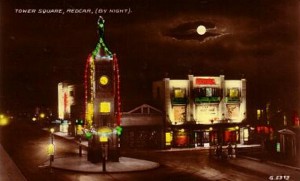 One of the events in connection with the erection of the clock was the complimentary dinner to Mr. John Bulmer, of the honorary secretaries of the committee on his departure for Australia.

Mr Bulmer was one of the secretaries of the clock committee, and an old Redcar resident. A member of the first urban joint council elected 199, and in 1900 became chairman of the council.

In March 1902, the council decided to purchase a public clock, to be placed in Central Square, as a celebration of the coronation of Edward VIII. The idea did not receive a lot of support and only raised the sum of £300 so the idea was shelved.

Nine years later the scheme was re-introduced as a memorial clock for the late King. The structure was completed at the end of 1912. On January 29th.1913 crowds gathered at Central Square to see the ceremony of the timepiece being set in motion. Members of the council were invited to attend and the local Territorial, men of the National Reserve, Boys Scouts and the Church Lads Brigade were all positioned around the Clock. Warren by Band played and Councilor Hudson was presented with a silver knife with which to cut the tr-coloured ribbon holding the pendulum.

When the clock was built it was weight driven, after the Second World War it was converted to electricity and a small electric motor now drives the hands. A bell weighing 4 ½ hundredweights was originally donated by a Mrs. Walton and was installed to chime the hours but complaints from nearby residents and the owners of the Clarendon Hotel the chiming mechanism was disconnected.

The bell, after being unused for 60 years, was removed in 1974 and given to St. Marks Church, Marske. It was melted down and recast then added to the new Bells fitted there in 1975. It was thought that to further unite the two towns (who were only amalgamated in 1899) it would be built on the boundary.

The clock was built on the Redcar/Coatham boundary, and the faces of the clock point, North, South, East, and West. A grassy common and a fence had previously been the boundary between Redcar, and Coatham, and were erected from the beach inland. The location of the fence was (as we know it) along West Terrace and West Dyke Road.

John Dobson, a builder, was already building houses along Granville Terrace and was given the contract for the Clock. The Architect was a Mr. Robert Richardson. A Mr. Banks made the sailing ship weather vane locally.

A six feet high, spent shell casing was on display for many years under the small archways, but was eventually removed.

It should be mentioned that the firms who supplied the bricks for the clock are still in business today, and also the business responsible for the clock mechanism.

LIFEBOAT – Grand Fete to the Free Gardeners and Fishermen of Redcar