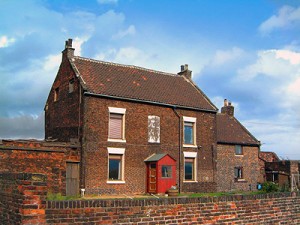 Marsh Farm House is a Grade II Listed Building, and the present residents are Bill & Margaret Troup and May their daughter May and her husband Mike Dearman, who actually owns the property.

Marsh Farm House Farm was believed to have been built in 1770 on a track known as Marsh Road, and on 1815 map it is the only building standing as the area was very marshy. It was built as an inn to serve the needs of the sailors and travellers.

The building is situated next to the right of way; Fisherman’s crossing which crosses the local golf course, to the beach. Apparently lifeboats used to be taken across this crossing to the sea to rescue people many years ago.

Another story says that monks or religious people also used to use the inn on their way to and from Whitby Abbey and Hartlepool abbey, on their way along the Black Path passed the farm. The workers at the local Iron and steel works used this path regularly before the day of public transport.

In the 1901 census the people who lived at the House were guardians of the hounds for the local hunt.

All sorts of trades through the ages have used it and Bill Troup and his father Jack found 3 old mill stones which were made of granite (which is strange as they are usually made of sandstone) and two are at present at Kirkleatham Museum. They kept one and today is in the front garden unfortunately in two halves. Barges used to come up the stream from the river almost to the farm. This was before there was any iron works, it was just open land.

The old granary with two floors on the side of the property is clearly seen on the 1929 photo. Bill says as a child early 2nd World war years he used to swing from the rafters as a game. Dorman Longs Steel Ltd then owned the property; and they gave the civil defence permission to practice there and do what they liked with the building, they knocked it down as part of a practice.

Before the 2nd world war and to the end in 1945 there was a wooden hut, again clearly seen on the 1929 photo on the side of the granary, which sold fish and chips by a Mr Winterbottom.

It comes as no surprise that the farm was rumoured to have been used by smugglers, it was in an ideal position and lookouts could see for miles around, with the building being on its own in the middle of marshy land.

Jack used to keep pigs to the rear of the farm and Bill had to take the horse and cart out every night after school and later work, to the local cafes etc. for the pigswill and then boil it up in the rear to feed the pigs. Jack then used to have the pigs slaughtered at Christmas and he gave the pork away to his friends and relations, even had Bill deliver it!

On the corners of the barn situated to the north side are situated sandstone blocks which are believed to have come from the ruins of an old chapel believed to have been on the now golf course next to the Fisherman’s Crossing. Sulpitius Chapel was its name in the 15th century. Human bones were found adjacent to Fisherman’s Crossing in 1911 and were then buried in Coatham Church yard. No one knows exactly where the chapel was situated.

In the 1960’s British Steel the new owners were going to demolish the farm so Jack and Bill Troup, in consultation with Mr Green of British Steel who was very sympathetic to them, were able to buy the farm and have it listed. The rest of Warrenby wasn’t so lucky the local council demolished all the houses.

Many thanks to the present residents Bill & Margaret TROUP, and of course Bruce Ross for the research putting it altogether for us.