ZETLAND – The beginning of the Museum 1933 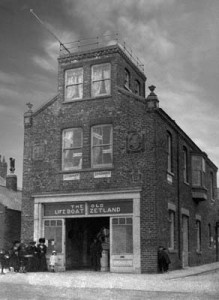 I see that according to the minutes of the Finance Committee the solicitors of the executors of the owner of the lease of the old lifeboat-house have approached Redcar Corporation inquiring whether that body would be prepared to purchase the leasehold interest of the property. The Finance Committee resolved that the matter should be referred to a sub-committee consisting of the Chairman and the Deputy Chairman, Aldermen Charlton and Wardman, Councillor’s Cruddas, Dobson, Nixon and Picknett, to inspect the property and report. On the merits of the lease and its present value I do not pretend to anticipate the verdict of the sub-committee appointed to make the inquiry, but as the premises house the old “Zetland” lifeboat, which was first launched in 1802 and is quite one of the most interesting relics of old Redcar, it seems obviously desirable that the Corporation should find fitting accommodation for the old vessel. In addition to the “Zetland” there are numerous other relics – quaint old prints of Redcar and Saltburn, and bits of wreckage which bring to mind episodes in the history of the town that deserve preserving. At present these relics are just stacked round the room with no special arrangement or order. If they could be taken over, probably in conjunction with the establishment of a Redcar Library they could be a sideline of the Library Committee. Reverence for the past is not a strong feature of the present generation but that is no reason why many of the older generation should not make as effort to retain the relics of ancient Redcar. We all hope that Redcar will some day become a flourishing city of say 50,000 inhabitants, and then it will be something of a thrill to turn in from the thronged Promenade of those days and have a look at the pictures of what the on-time fishing village looked like and to feel and see the lifeboat that saved so many lives for the best part of a century.