Accreditation The Redcar and Saltburn-by-the-Sea Gazette 01/05/1868. 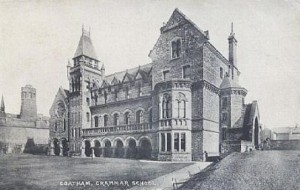 Sir William Turner’s School, Coatham. Note the old windmill at the rear the sails have been taken off and no longer working.

The foundation stone of the new schools, near the Railway Station, Coatham, in substitution of the present schools at Kirkleatham, founded by Sir William Turner, was laid on Saturday (25/04)by A. H . T. Newcomen. Esq., In presence of a large number of persons. Amongst those present we noticed, Mrs A. H. T. Newcomen, Mr C. M. Newcomen, J. T. Wharton, Esq., Skelton Castle; Dr Deas, Kirkleatham; Dr Locke, Coatham; Rev T. Robson, vicar of Marske; Rev J. D. Wawn, incumbent of Kirkleatham; J. Dodds, Esq., Stockton; C. J. Adams, Stockton; W. Rutherford, Kirkleatham; Rev J. L. Page (Wesleyan minister), Coatham; J. Hogg, H. Denton, T. Kean, J. H. Webster, &c., &c. The building is situated at East Coatham. The principal front faces Coatham road. Another front will look upon a road now forming in connection with extensive Villa residences to the North on the south side of the railway. The building comprises master’s house, school premises, playground, &c. The master’s house stands on the West side, and will be approached by a carriage drive up to the portico. It contains breakfast rooms, kitchens, sculleries, bedrooms, and all requisite conveniences. The school comprises dining hall, covered play shared, with classrooms over, and above the classrooms are the dormitories, approached by a large staircase. Upon the front of the building will be a colonnade, surmounted by a large tower. The style of architecture is Gothic. The building will be of red brick, with stone dressings. In length, the main building will be over 100 feet, and 50 feet in width, surrounded by lawns, gardens, grounds, &c. The estimated cost is £4,000.

The proceedings were commenced by a procession of ten little boys in surpluses, followed by a young man bearing a banner, and the Rev R. L. page, incumbent of Coatham, from a shed in the field to the players where the storm was suspended, when a short service was gone through. The stone having been duly “crossed” by the officiating minister, Mr Joseph Dodds said that the local newspapers had been deposited in the storm with a parchment scroll, having the following written upon it:-

“With the scroll is deposited a print of the scheme for the management and regulation of the said school as approved by the Court of Chancery, on 31 July, 1855, and a ground plan and block of the building and premises.

Sir, as chairman of the trustees and visitor of the schools, I present you with this trial, and request that you will now lay this stone.” – The stone was then fixed, and Mr Newcomen said, quote in the name of the Father, and the Son, and of the Holy Ghost, I declare this stone, Julie laid. It gives me much pleasure in doing this duty, and I hope that the circumstances under which it is laid will be accepted as a sign that the intentions of the founder will be carried out, and that this school, when completed, may be the means of giving instruction to many who otherwise would not have been able to obtain it. I hope the building. We have begun successfully may be completed in safety, and that it may long flourish.

A psalm was then some to a Gregorian tone, which finished the proceedings.

Mr S. Hoggard, of Redcar, after wards took a photograph of the scene, and was very successful in the attempt to produce a good picture.